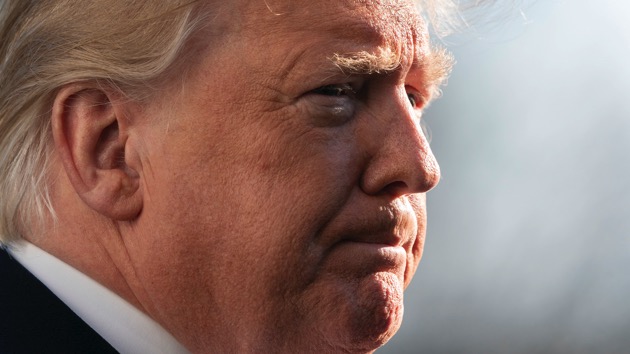 Chris Kleponis – Pool/Getty Images(WASHINGTON) — President Donald Trump will travel to the southern border on Thursday amid stalled negotiations between the White House and Democrats over funding for the border wall during a partial government shutdown.
And the president announced in a tweet that he will make a prime-time speech on border security Tuesday night.
The latest moves come as the president earlier on Monday repeated that he was considering declaring a "national emergency" over border security — something he said over the weekend might come in the "next few days."
White House press secretary Sarah Sanders announced the trip to the border in a tweet on Monday.
"@realDonaldTrump will travel to the Southern border on Thursday to meet with those on the frontlines of the national security and humanitarian crisis. More details will be announced soon," she tweeted.
After a weekend of negotiations to end the partial government shutdown made little to no headway, talks between the White House and Democrats appear to have reached a standstill just four days until the funding lapse starts taking its first toll on government paychecks.
Monday afternoon, Vice President Mike Pence, who had been leading the administration in the talks, gave an off-camera briefing to White House reporters. He was accompanied by Homeland Security Secretary Kirstjen Nielsen and senior adviser Jared Kushner.
He said the president has invited congressional leaders back to the White House for more talks.
Pence repeatedly called the situation at the border a “humanitarian and national security crisis,” framing it with the same terms Trump tweeted will be the focus of his Tuesday speech. But Pence said the president has not made a decision on declaring a national emergency to bypass Congress.
Af as breaking the stalemate, Pence said, “Democrats are refusing to negotiate until the government reopens. The president is not going to reopen the federal government with a promise that negotiations are going to begin after that.”
Meanwhile, Senate Democrats are vowing to block legislation that is unrelated to re-opening the government until the Senate's top Republican, Sen. Mitch McConnell, agrees to call House-passed appropriations measures to the Senate floor for a vote.
Last week, House Democrats took their first major legislative votes of the new Congress, approving two measures to end the then 13-day partial government shutdown — despite a presidential veto threat.
A vote on a package of six appropriations bills late Thursday night passed 241-190, while lawmakers also approved a narrow measure to extend funding for the Department of Homeland Security until Feb. 8 by a tally of 239-192.
According to a senior Democratic aide, Senate Minority Leader Chuck Schumer has notified the Democratic caucus that he will vote against proceeding to a measure authorizing security assistance to Israel, the first piece of legislation the Senate will consider this session, because Senate Republicans should instead bring to the floor the House-passed bills to reopen the government.
Sen. Chris Van Hollen, a Maryland Democrat, first raised the idea of blocking legislation in a tweet over the weekend.
"Senate Democrats should block consideration of any bills unrelated to opening the government until Sen. Mitch McConnell and Senate Republicans allow a vote on the bipartisan bills the House passed to open the government. Mitch, don’t delay. Let’s vote!" Van Hollen tweeted over the weekend.
Meanwhile, McConnell appears to have taken a back seat on negotiations. Over the last several weeks, he has reiterated multiple times that the Senate will not vote on any budget agreement that doesn't come with Trump's explicit approval.
"The package presented by the House's new Democratic leaders yesterday can only be seen as a time-wasting act of political posturing," McConnell announced on the Senate floor Friday morning.
He went on: "It does not carry the support of the president … the president would actually veto it. And it cannot earn the support of 60 of my colleagues over here in the Senate. My friends across the aisle understand the ground rules perfectly well."

Taking to Twitter Monday morning, President Trump again claimed he "no doubt" would have the power to declare a national emergency to order the military to construct his border wall if a deal isn't reached with Congress.

Trump's tweet cited comments by Rep. Adam Smith, D-Wash., on ABC's "This Week" Sunday, when asked about the president's Friday comments confirming he was considering an emergency declaration.
While Smith acknowledged the president generally has broad powers in the event of a national emergency declaration, he also said Trump's order would likely face immediate legal scrutiny.
"In this case, I think the president would be wide open to a court challenge saying, where is the emergency?" Smith said. "You have to establish that in order to do this."
The top Democrat on the Senate Armed Services Committee blasted Trump for playing politics.
“The idea that President Trump is considering declaring a phony national emergency as a pretext to take billions of dollars away from our troops and defense priorities in order to pay for his wall should alarm all Americans," Sen. Jack Reed, D-R.I., said in a statement Friday.
“Defense spending is for national defense, not the Trump campaign’s political wish list," Reed said. "I will work with colleagues on both sides of the aisle to block any attempt to take money that has been dedicated for our troops and redirect it to construction of a wasteful, ineffective wall."
During a question and answer session with reporters Sunday, Trump seemed to suggest that the ongoing shutdown negotiations rather than the border crisis were the driving factor in whether he'd decide to move forward with the order.
"I may declare a national emergency dependent on what’s going to happen over the next few days," Trump said.
As of Monday afternoon, the White House didn't have any immediate comment on when those negotiations would continue.
Democrats over the weekend had requested the White House provide a detailed outline regarding the president's $5.6 billion border funding request, and the White House responded with a letter requesting an additional $4 billion for detention beds as well as millions in humanitarian aid and other immigration policies. A Democratic aide familiar with the negotiations said that "no progress" was inevitably made towards reaching a compromise.
"We've made movement on our part in providing the information that the Democrats need," White House director for strategic communications Mercedes Schlapp said in an interview with Fox News. "The ball is in their court."