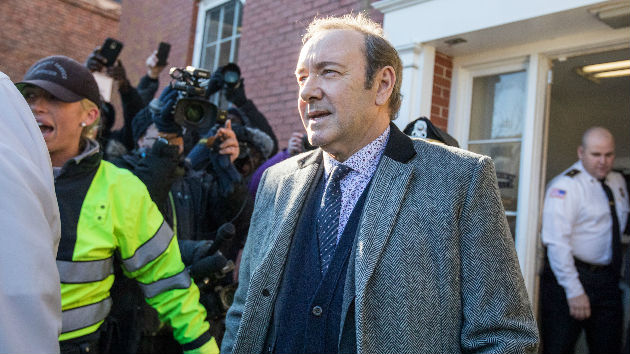 Photo by Scott Eisen/Getty Images(MASSACHUSETTS) — There was a mob scene Monday morning at a small municipal building on Nantucket Island, as Oscar-winner Kevin Spacey was arraigned on a charge of felony indecent assault and battery.

The charges stem from an alleged 2016 encounter with an off-duty busboy at a local restaurant and bar. The alleged victim claims the actor groped him after plying him with alcohol.

A not guilty plea was entered on his behalf.

In a packed, standing-room-only courtroom that fits less than 50 people and serves as the island’s only judicial facility, Judge Thomas Barrett released Spacey on his own recognizance — but warned the actor, "If you’re charged with another offense while this matter is open, you could be held in jail for 90 days."
Spacey nodded.
Barrett also ordered that Spacey have no contact with the alleged victim.
Spacey's attorney Alan Jackson asked the judge to order that “data” in the case be preserved — likely a reference to a Snapchat video the alleged victim took, which allegedly shows Spacey groping him.

The actor’s attorneys have viewed the video and contended in previous court hearings that it simply shows one person’s hand on another person’s stomach area.
Jackson called the data potentially “exculpatory," which means it could prove Spacey not guilty.
"I simply don’t want to see any of that data deleted or destroyed,” Jackson said.
Spacey arrived at Nantucket’s airport from Baltimore in a Lear jet that arrived just over an hour before his arraignment. He then climbed into a silver Lincoln SUV that took him to Broad Street in Nantucket.
The actor's next court date, at which he does not need to appear personally, is March 4, at 11 am ET.