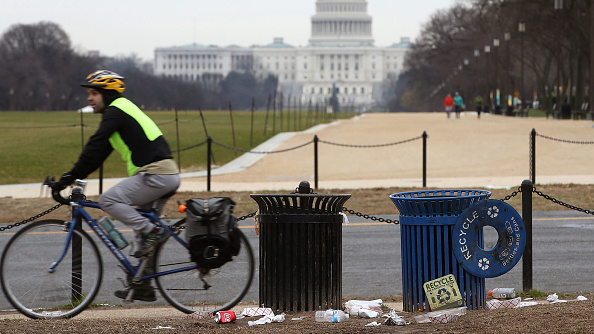 Mark Wilson/Getty Images(WASHINGTON) — As the partial government shutdown continues into its second week with no agreement to end it, more Americans are starting to feel the impact of a lapse in federal services.
Federal employees and contractors are facing third week without pay but more people feel the impact in sometimes unexpected ways. Business owners in Washington say they see a decrease in business due to fewer tourists since the Smithsonian museums closed this week. Delays in grant and loan applications, planning for future projects and interrupted scientific research could have long-lasting impacts even after the shutdown ends.
This shutdown isn't exactly like others in the past because only part of the government is closed. Some branches like the Department of Defense and the legislative branch already have funding for next year. But other agencies like the U.S. Department of Agriculture, Interior Department, and IRS are closed and most employees were sent home.
A great number of people won't see an immediate difference from the shutdown in their everyday life, though many impacts are difficult to measure. The financial services company Standard & Poor's estimates the current shutdown will cost the U.S. economy $1.2 billion a week.
Here are some answers to the most frequently asked questions about the shutdown and how it is or isn't likely to impact you:
Travel
The average traveler won't notice much of a difference in airport operations during the shutdown. Transportation Security Administration officers and air traffic controllers are still working as usual, though they aren't being paid.
International travel plans also shouldn't be significantly impacted.
While the State Department is affected by the shutdown and some bureaus within the agency have furloughed workers, passport services remain open because their funds come from fees.
At embassies and consulates abroad and passport agencies at home, U.S. citizens can still apply for a new passport or renew a passport. The only exception is passport agencies that are located within a government building that is closed because of the shutdown.
The Transportation Security Administration is preparing contingency plans so that airport security standards do not suffer in case employee call-outs increase further and begin to have an effect on wait times. The agency confirmed on Friday that more screening officers than usual have called in sick since the holidays and the lapse in funding began, but said the bump has not had an effect on security.
Some people applying from Global Entry status, which allows travelers to get through Customs and Border Protection more quickly when traveling internationally, say their interviews were canceled during the shutdown without notice. A Department of Homeland Security official told ABC News that the program is not processing any applications, though that does not impact the TSA Precheck program which is paid for by fees.
You may see some closures if you plan to visit any National Parks or other federal lands. While open-air parks are open, some campgrounds and other areas have closed due to concerns about health, safety and potential damage to natural resources. At the national parks, trash collection and bathroom cleaning is set to restart this weekend. The National Park Service will use money collected from entrance and usage fees in previous years to pay for those services and increased law enforcement.
Benefits
Social security, Medicaid and Medicare are still operating and providing benefits as usual. Since the programs are deemed "mandatory" the funding is secure even if the broader department doesn't have its budget for next year yet.
The Department of Housing and Urban Development confirmed Monday that 1,150 housing contracts are at risk due to the shutdown, putting people who receive federal housing assistance at risk of eviction.
HUD sent letters to landlords on Friday urging them to use any reserves they have to prevent evictions.
The agency notes that these landlords have always been compensated eventually and that evictions haven’t been a problem in past shutdowns.
According to the Department of Agriculture, food stamps and other nutrition benefits are also set, at least until February.
The Department of Veterans Affairs is not impacted by the current shutdown, so veterans' benefits and health care services are continuing as usual.
Even though federal employees aren't getting paid during the shutdown they still have access to their benefits through their employer, according to the Office of Personnel Management.
Furloughed federal employees can apply for unemployment during a shutdown, according to the office of personnel management, but are advised to consult the specific rules in their city or state.
Taxes
While the government is shut down the vast majority of IRS employees are not at work, so there is no one to respond to taxpayer questions, issue tax refunds or perform other administrative functions. Electronic tax returns can be processed, but the refund will not be issued. Some paper tax returns could be processed in batches, because those operations are considered necessary to protect government property.
But the White House will order the IRS to issue tax refunds even while the government is shut down, Russ Vought, acting director of the Office of Management and Budget, said at a briefing Monday with Vice President Mike Pence.
It's unclear exactly how that will be carried out and how many IRS employees would go have back to work without pay to start processing tax refunds.
According to the IRS contingency plan, the agency will meet throughout the course of the shutdown to determine if employees need to be brought back to work, without pay, to keep up with some of these functions. The contingency plan expired at Dec. 31, before tax season officially started, so it's unclear exactly how the IRS will respond as the shutdown continues into 2019.
After the 2013 shutdown, which lasted 16 days in October, $4 billion in tax refunds were delayed, according to the Office of Management and Budget.