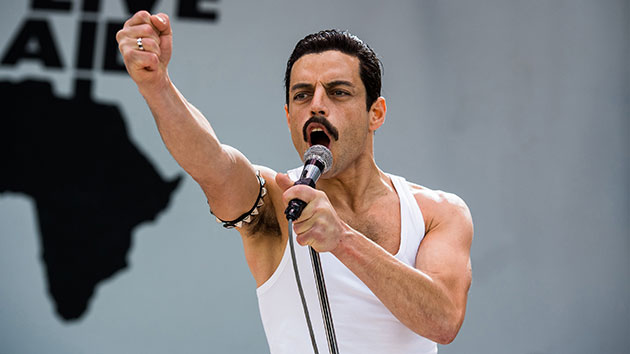 "I love you, you beautiful man! This is for — and because of — you, gorgeous!" said Malek, thanking Mercury from the podium. "Thank you for showing us the power of embracing your true self," producer Graham King said of Mercury, who died of AIDS in 1991.

Among the movies Bohemian Rhapsody beat out was another drama set in the music industry: A Star Is Born, which had four nominations but only managed to win one: Best Original Song, for "Shallow." Chart-topping artists Lady Gaga, Mark Ronson and the two other co-writers on the song took the stage to accept the award.

"I just have to say that as a woman in music, it is really hard to be taken seriously…and these three incredible men…lifted me up. They supported me," Gaga told the crowd.

That theme of female empowerment was a major one throughout the telecast. Glenn Close, who beat Lady Gaga, among others, to win Best Actress in a Drama for The Wife, noted that the movie is about a woman who puts her husband before herself.

"We [as women] have to find personal fulfillment. We have to follow our dreams," urged Close. "We have to say, 'I can do that and I should be allowed to do that!'"

Regina King, who won Best Supporting Actress for If Beale Street Could Talk, pledged that she'll make sure everything she produces over the next two years will be staffed 50/50 by men and women. And Rachel Brosnahan, who won Best Actress in a TV Comedy for The Marvelous Mrs. Maisel, praised "the village" it takes to create the show, but added, "Our village is a matriarchy."

In addition, The Hollywood Foreign Press Association presented its very first award for lifetime achievement in television to a woman: 85-year-old Carol Burnett. In fact, the award is named after her.

The night's other big winners: Netflix's The Kominsky Method, winning for Best TV Comedy and Best Actor in a Comedy for Michael Douglas, and Green Book, which won Best Motion Picture — Comedy, Best Original Screenplay and Best Supporting Actor in a Comedy, for Mahershala Ali.

Green Book is a true story about Tony Vallelonga, an Italian-American who's hired to drive an African-American pianist, Dr. Don Shirley, on a concert tour through the Deep South in the time of segregation. At the podium, director Peter Farrelly said, "We're still living in divided times, maybe more so than ever. And that's what this movie is for. It's for everybody. If Don Shirley and Tony Vallelonga can find common ground, we all can."

The most-nominated movie going into the Globes, the black comedy Vice, ended up winning just one trophy: Best Actor in a Comedy for star Christian Bale. He plays Vice-President Dick Cheney, and may be the only award show winner ever to thank Satan for inspiration.

Jeff Bridges received the Cecil B. DeMille Lifetime Achievement Award and gave a long, rambling speech that featured him channeling his most famous character, The Dude from The Big Lebowski, more than a few times, especially at the end when he told the audience, "We’re alive! We can make a difference! We can turn the ship in the direction we want to go, man!"

The show was hosted by Andy Samberg and Sandra Oh, the latter of whom also won Best Actress in a TV Drama for Killing Eve. Unlike past Golden Globes hosts, their monologue and jokes were more goofy and sweet than political or insulting. But Oh ended their opening monologue on a serious note.

"I said yes to the fear of being on this stage tonight because I wanted to…look out onto this audience and witness this moment of change," said an emotional Oh.

"And I’m not fooling myself. Next year could be different. It probably will be. But right now, this moment is real.”