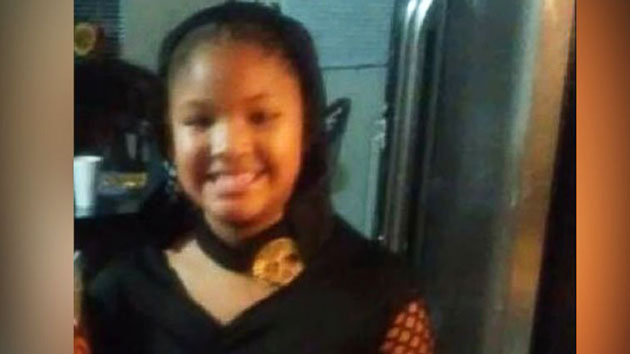 Harris County Sheriffs Office(HOUSTON) — A 20-year-old man has been charged with capital murder in the death of 7-year-old Jazmine Barnes, who was shot in the head when a gunman opened fire on her family's car in Houston last week in what investigators believe was a case of "mistaken identity."

Jazmine was in the back seat of her mother's car when a vehicle pulled up alongside and opened fire on Dec. 30.

The Harris County Sheriff's Office said early Sunday that Eric Black Jr. was arrested without incident after a tip and subsequently admitted to being involved in the shooting.

"I'm happy I can mourn my baby's death and just [be] ready to bury her on Tuesday," Jazmine's mother, LaPorsha Washington, told ABC station KTRK-TV in Houston on Sunday.

In an interview with ABC News on Sunday, Jazmine's father, Christopher Cevilla, said he was "confident" police have captured the men responsible for his daughter's death.

"We haven't had the chance to sit down and really mourn the death of our daughter," Cevilla said. "So, that's what we're going to do. We're going to mourn her and we're going to get through this as a family."

Washington said detectives came to her house Saturday night to inform her that two suspects had been arrested in the killing of her daughter.

A second man, Larry Woodruffe, 24, has also been taken into custody, the Barnes family's lawyer, Lee Merritt, confirmed. Woodruffe is "believed to be the shooter," according to Merritt.

During a news conference, Sunday afternoon, Harris County Sheriff Ed Gonzalez declined to name the second suspect, who has yet to be charged in Jazmine's killing. He said investigators are still working to corroborate information on the second suspect and that he didn't want to say anything that could jeopardize the investigation.

"But we're fairly certain there were two individuals involved," Gonzalez said. "At this point, we feel comfortable with where we are at."

Woodruffe appeared in court Sunday on a drug charge and a prosecutor told the judge he's a suspect in a capital murder case, but didn't mention Jazmine's slaying specifically, KTRK reported.

Black was pulled over by police on Saturday for making a lane change without signaling and marijuana was found in his vehicle, according to Black's initial appearance before a judge at 5 a.m. local time. During the hearing, it was revealed that an anonymous informant emailed the sheriff's office last week and said two people with the initials "EB" and "LW" had committed the shooting.

Black's name was found through social media and identified as a suspect, prosecutors said.

After Black was taken into custody for the signal violation and possession of marijuana, he was interviewed by homicide detectives and allegedly admitted to driving a rental car from which the shots that hit Jazmine and her family's car were fired, prosecutors said during Black's hearing Sunday. Black also allegedly told police he had the 9mm pistol at his home, which matched shell casings found at the scene of Jazmine's shooting, authorities said.

Black was appointed a public defender and ordered to be held in jail without bail.

Gonzalez said the tip that led investigators to Black and the other suspect first came to Shaun King, a social justice activist and journalist, who passed the information on to sheriff's investigators last week.

King and Merritt had offered a $100,000 reward for information leading to the arrest of the shooter.

An anonymous informant told King and investigators that the suspects thought the vehicle Jazmine, her mother and three sisters — age 15, 13, and 6 — were riding in was occupied by someone they had a confrontation with hours earlier and they shot the car by mistake, a prosecutor said at Black's court hearing.

The tipster gave investigators the initials of the two men involved in the shooting as "LW" and "EB" and said they did not know it was the wrong vehicle until they saw TV news reports later that night, the prosecutor said.

The tipster told investigators that "LW" committed the shooting while Black drove, the prosecutor said.

Sheriff's deputies collected eight shell casings at the scene of the shooting, according to the prosecutor.

For days authorities had said they were hunting for a white man in a red pickup truck, based on a description given to investigators by Jazmine's 15-year-old sister, Alxis Dilbert, who was riding in the front seat of her mother's car when the shooting occurred and other independent witnesses, including one who briefly followed the red truck, Gonzalez said.

Alxis said during a news conference on Thursday that a red truck pulled up alongside the passenger side of her family's car before switching lanes to the driver's side of the vehicle just before gunfire erupted. Alxis and her two other sisters in the car were not injured in the incident.

Alxis said she briefly saw the occupant of the truck who pulled up next to her family's car at a traffic light and described him as white with blue eyes and wearing a black hoodie.

"It was like a look into his car. You know like you're driving and you just look into somebody's car and make eye contact and look back," Alxis said of seeing the gunman.

Both Black and Woodruffe are African-American.

On Friday, police even released a composite sketch of a white, blue-eyed man they were looking for as Jazmine's relatives, the family's attorneys and community activists said the shooting appeared to be racially motivated.

Washington, who suffered a bullet wound to the left arm in the shooting, said at Thursday's news conference that she believed the attack was a hate crime.

But on Sunday, the Harris County Sheriff Office announced that "the Jazmine Barnes Homicide investigation has taken a new direction."

"At this time, investigators do not believe Jazmine's family was the intended target of the shooting, and that they were possibly shot as a result of mistaken identity," according to a statement from the sheriff's office.

But on Sunday, the Harris County Sheriff Office announced that "the Jazmine Barnes Homicide investigation has taken a new direction."

"At this time, investigators do not believe Jazmine's family was the intended target of the shooting, and that they were possibly shot as a result of mistaken identity," according to a statement from the sheriff's office.

"I am grateful to our dedicated investigators, the partner law enforcement agencies that provided vital assistance, and tipsters from across the nation who pulled together to support our work to get justice for Jazmine," Gonzalez said in a statement. "Our work is not finished, but I believe the people of Harris County can take comfort in knowing we have made great progress."

Merritt explained the discrepancy in the police sketch and suspects arrested, saying, "Larry Woodruffe doesn’t fit the description offered by the 4 different witness statements or composite sketch. Accordingly, this tip was difficult to believe. Assuming the confession elicited is reliable — it is possible the previously identified suspect seen fleeing by several independent witnesses was a [bystander] attempting to escape the shooting."

Washington told KTRK that investigators confirmed that Alxis' description of the man in the red truck "wasn't a figment of her imagination."

"When they looked at the cameras they saw a red pickup truck and the gentleman in it and it was a white guy, but he crossed over from my right side to the left side and got on the freeway," Washington said.

"At the end of the day, like I say, anything helps and I'm just glad for the support we've had …," Washington said.

Jazmine's funeral is scheduled to be held at noon on Tuesday at the Community of Faith Church in Houston, followed by a balloon release in honor of the girl. DeAndre Hopkins has pledged to donate his $29,000 game check from Saturday's Texans playoff game against the Indianapolis Colts to pay for Jazmine's funeral.

Merritt told ABC News on Sunday that Jazmine's parents want to use some of the money that's poured in from people across the nation wanting to help the family to establish the Jazmine Barnes Foundation to provide scholarships to future school teachers, which the girl aspired to be.

"The parents of Jazmine have constantly emphasized that they don't want their daughter to die in vain, that they want her legacy to live on," Merritt said.