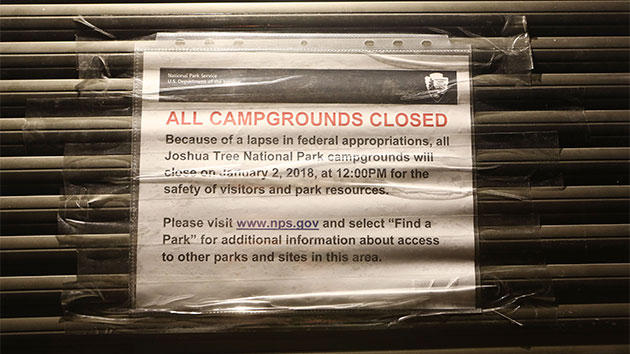 Mario Tama/Getty Images(NEW YORK) — The National Park Service plans to use money collected from entrance and usage fees in previous years to help pay for trash cleanup, restroom maintenance and increase law enforcement in the parks.

Even though the Interior Department is largely closed during the shutdown, open-air national parks remained open with limited staff. After the first week, visitors started reporting problems with excess trash and dirty restrooms. Some volunteer groups attempted to help at multiple campgrounds and other areas have closed citing concerns about health and safety.

Conservation advocates raised concerns that without enough rangers to provide safety warnings and enforce rules in the parks, it could lead to more injuries and other safety issues.

“As the lapse in appropriations continues, it has become clear that highly visited parks with limited staff have urgent needs that cannot be addressed solely through the generosity of our partners," P. Daniel Smith, deputy director of the National Park Service, said in a news release.

The service collected $199 million in entrance fees in the 2016 fiscal year, according to a press release. A spokesman for the park service said Sunday they do not know how much of that money would be used under this new plan or how much income is being lost because parks are not currently collecting entrance fees.

Fees to enter or use campgrounds or other facilities at national parks are intended to be used "to enhance the visitor experience," according to the agency's website. That includes maintenance and repairs, improving accessibility and maintaining wildlife habitats in the park.

The park service has previously proposed increasing entrance fees to help make up for a severe backlog in needed maintenance at the parks. Theresa Pierno, president and CEO for the National Parks Conservation Association, said this proposal robs already struggling parks of even more money that will "dig parks into an even bigger hole."

"Instead of working to reopen the federal government, the administration is robbing money collected from entrance fees to operate our national parks during this shutdown. It’s incredibly concerning that the acting Interior secretary is putting political pressure on Superintendents to keep parks open at the expense of parks’ long-term needs and protection," she said in a statement.