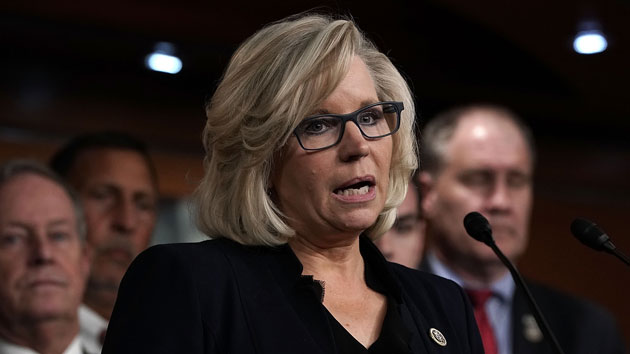 Alex Wong/Getty Images(WASHINGTON) — The new chair of the House Republican Conference said Sunday that reports the administration is slowing down its withdrawal of troops from Syria makes her “very hopeful” because “it would be really devastating” for the United States to pull out “precipitously.”

“I've said that the administration — that the United States should not pull out of Syria,” Rep. Liz Cheney, R-Wyoming, said on “This Week” Sunday. “I've been very hopeful as I've seen reports that we are now going to slow that down. We've got about 2,200 special operations forces there and they are conducting crucially important work in terms of air support, in terms of artillery support.

“It is their presence that has really helped the Kurds be effective in terms of the battle against ISIS and it would be really devastating if we were to pull out precipitously.”

President Donald Trump announced in December that he would be pulling troops from Syria, declaring the Islamic State had been defeated in the country. The Pentagon confirmed that it had started the withdrawal process later that same day, and Secretary of Defense James Mattis resigned shortly after the decision was announced.

We have defeated ISIS in Syria, my only reason for being there during the Trump Presidency.

However, according to the Associated Press, his national security adviser John Bolton, said in Jerusalem Sunday that there wasn’t a timeline for the withdrawal and that “there are objectives that we want to accomplish that condition the withdrawal” from the Middle Eastern country. Bolton said conditions include defeating the “remnants” of ISIS in Syria and establishing protections for the U.S.-allied Kurds against any Turkish offensives.

Cheney told ABC News Chief Anchor George Stephanopoulos that pulling troops out hastily could create “a situation where the Iranians were given free rein to really establish a land bridge there and control and dominate Syria.

“It would allow ISIS to begin to again form safe havens potentially and it would not serve the interest of our ally, Israel, and others in the region."

"No. Obviously I disagree with the president's assessment of the history there," Rep. Liz Cheney says when asked by @gstephanopoulos about President Trump's statement that Russia's invasion of Afghanistan was justified in the late 1970s-1980s https://t.co/P6iz1j1VA4 pic.twitter.com/3NkcYIN26w

The new chairman of the House Armed Services Committee, Rep. Adam Smith was asked earlier on “This Week” Sunday, whether he knows the policy in Syria and supports it.

“I don't think anybody knows what the policy is right now. That’s part of the problem,” the Democratic congressman from Washington said.

“Our allies matter enormously, and the president treats them like dirt,” Smith said. “He insults them regularly, does not consult them, makes radical decisions via Twitter and then changes his mind the next day.

“Look, the world is big and complicated. The U.S. is not able to do everything on our own. We need allies, we need people to support us."

Smith agreed with Bolton that protecting the Kurds and ensuring ISIS cannot regain power are the two big concerns there.

“We don't want ISIS to rise again and be a transnational terrorist threat and we don't want our allies, the Kurds, to be slaughtered by [President Recep Tayyip] Erdogan in Turkey,” he said on “This Week.”