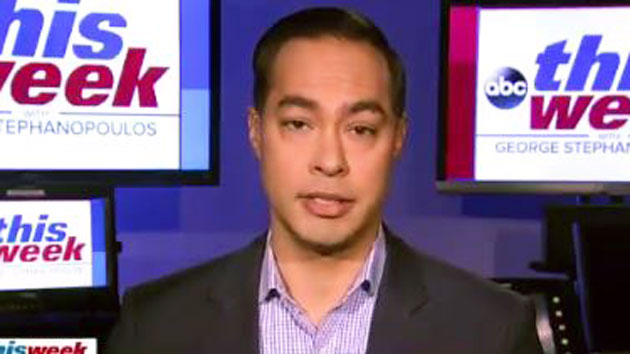 ABC News(NEW YORK) — As he prepares to announce an expected run for president on Jan. 12 in San Antonio, Julián Castro said Sunday on "This Week" that he believes he has a "strong vision for the country's future," and that is what is driving his interest in a potential run for the White House.

The former mayor of San Antonio and housing chief under former President Barack Obama told ABC News Chief Anchor George Stephanopoulos that he thinks "there are a whole bunch of people that feel a tremendous difference in terms of the leadership that we had under Barack Obama versus the lack of leadership and the total disaster that we have under Donald Trump."

The 44-year-old Castro, who offered his experience as a cabinet secretary and mayor as qualifications for president, announced in a video last month that he had launched an exploratory committee for a 2020 run. In his video, he said that he "never thought" he would be making such an announcement.

Castro entered politics early in his life, becoming the youngest-ever city councilman in San Antonio history at age 26, back in 2001. He was elected mayor in 2009 and gained a national political profile in 2012, when he delivered the keynote address at the Democratic National Convention.

In 2014, Obama named him secretary of Housing and Urban Development. He was also vetted as a potential Democratic running mate to Hillary Clinton in 2016.

Castro has already made numerous visits to Iowa and New Hampshire, key early states in the race for party nominations. He will travel to Iowa again on Monday.

He isn't the first Democrat to officially consider a run.

Last week, Sen. Elizabeth Warren, D-Massachusetts, launched her own exploratory committee for president in a video released online. This weekend, she's been making appearances in Iowa.

Warren, 69, has been a senator for Massachusetts since 2012. Prior to that, she served nearly a year from 2010-2011 as an assistant to the president and the inaugural special advisor to the secretary of the treasury for the Consumer Financial Protection Bureau (CFPB). The CFPB was established in 2010 when Obama signed the Dodd-Frank financial reforms into law.

Former Rep. John Delaney, D-Maryland, has been running for president for a year and a half already, having announced his candidacy in July 2017. Delaney finished his final term representing Maryland’s 6th Congressional District on Jan. 3.

There has been no shortage of speculation about the Democratic field of candidates. Former Vice President Joe Biden and Sens. Cory Booker, Kamala Harris and Bernie Sanders are among the potential candidates. A number of Democrats are expected to make decisions this month.

Stephanopoulos asked Castro what distinguishes him from the other potential candidates.

"I have experience actually running one of these federal agencies, being in charge of folks and making things work, also being mayor of a city that is one of the most diverse cities, as I said, in the United States, and then really in a fundamental way, represents the diverse future of America."

Stephanopoulos later pressed Castro on what in his background qualifies him to be commander-in-chief from a foreign policy perspective, to which Castro reiterated his experience running San Antonio and the Housing and Urban Development department.

He added, "I'm going to go out there and make the case."

Michael J. Fox on retiring from acting, embracing optimism, and re-discovering what people love about ‘Back to the Future’
Lindsay Lohan engaged to boyfriend Bader Shammas, “My future”
Great Scott! ‘Back to the Future’ hoverboard sells for half a million bucks at auction
Colts safety Julian Blackmon out for year
David Chang explores the future of lab grown protein in ‘The Next Thing You Eat’
Would-be Ahmaud Arbery jurors air strong opinions on killing, defendants