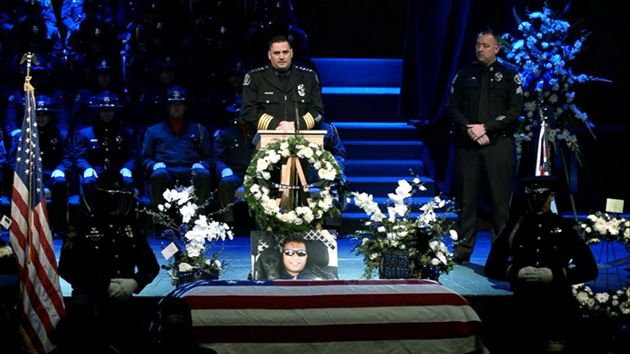 KXTV(SAN FRANCISCO) — Loved ones of slain Cpl. Ronil Singh shared heartfelt memories at his funeral on Saturday, more than a week after he was killed in the line of duty.
Randy Richardson, the chief of the Newman Police Department, remembered personal stories about Singh, whom he called "a great man."
"I know Ron is up there looking down, not wanting us to cry or me to cry, but he never listened to me so that's just what it's going be," Richardson said while getting choked up.
"It's been a difficult week for all of us at the department. It's been a difficult week for the family. And never did I think we'd be standing here saying goodbye to such a great man. I don't know where we'll go from here," Richardson said.
Singh, 33, a native of Fiji who immigrated to the U.S. and became a U.S. citizen, was shot dead during a traffic stop early on Dec. 26. The search for his killer sparked a massive manhunt.
His death marked the first line of duty death for the Newman Police Department, which serves a town about 100 miles southeast of San Francisco.
Singh is survived by his wife and 5-month-old son.
The suspect, Gustavo Perez Arriaga, was found two days after the shooting as he was reportedly headed for the southern border. The case reached the national stage when President Donald Trump tweeted about the case when authorities said the suspected killer was an undocumented immigrant from Mexico.
The attention was focused squarely on Singh at Saturday's funeral, however, with his brother Reggie thanking all of the branches of law enforcement who helped in the search for the suspect.
"He wanted justice and justice will be served," Reggie Singh said of his brother.
Several speakers, including his brother, friends, colleagues and a representative of the Fijian government, spoke at the service.
Richardson's comments marked some of the most personal, praising him as a husband and father, but also as a law enforcement officer, saying that even people that he had arrested have shared their condolences in the past week.
"He found a way to arrest people and put a smile on their face while doing it," Richardson said.
"Had I known Christmas morning when I sent him out that it would be the last time [he would see him], I would have hugged him," he added. "It would have been weird for him, I know, but I would have, and I would have held on.
"We will say goodbye today but you will always be in our hearts and we'll take it from here," Richardson said. "I love you."
Copyright © 2019, ABC Radio. All rights reserved.