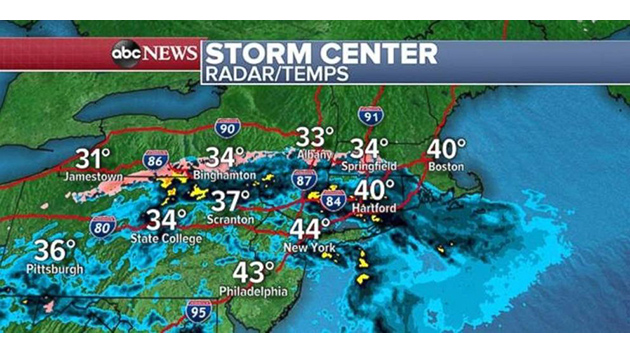 ABC News(NEW YORK) — A slow-moving storm system is sliding up the East Coast Saturday and bringing rain and some mixed precipitation to the Northeast.
After bringing heavy rain and flooding to parts of the south central U.S. earlier this week, the storm system brought strong winds to parts of Tennessee on Friday, with trees and some damage reported near Morristown.
Wind gusts of 40 mph to nearly 50 mph were reported in northern and central Florida on Friday afternoon.
The storm was bringing heavy rain to parts of the Northeast on Saturday morning. Locally heavy rainfall could cause isolated flash flooding through the morning hours in areas like New York City; Scranton, Pennsylvania; and Hartford, Connecticut. Some of the moisture is mixing with freezing rain and snow so slick roads are possible Saturday morning on I-90 and I-86.
While one storm is not notable, this is the third straight week the East Coast has dealt with rain after one of the wettest years on record in the East in 2018.
The storm will begin to slide to the north and east late Saturday, dragging the precipitation behind it. Cooler air wrapping around the storm will cause some lake effect snow on Sunday across parts of the interior Northeast. Snow accumulations are expected to remain light.
Series of storms to impact West Coast

A series of storms is set to bring widespread heavy rain, heavy mountain snow and strong gusty winds to the western U.S. over the next few days.
The first storm is forecast to come ashore in California on Saturday. As the first storm comes ashore, strong winds are likely in parts of central and northern California, as well as much of Oregon. Wind advisories and high wind warnings and watches have been issued for these regions for gusts of 25 to 40 mph, with some gusts near 60 mph. Power outages and downed trees are possible in San Francisco, Portland and Sacramento.
Rain and gusty winds are expected in Southern California as well, with high surf along the beaches, and heavy snow possible in the mountains of Los Angeles and Ventura counties. Locally, 4 to 8 inches of snow is possible.
By Sunday, heavy mountain snow will fall as far inland as Colorado, while another system sneaks in right behind it in Northern California.
Major travel delays, with near white-out conditions are possible through Monday in the Sierra Mountains and Northern California. Travel is highly discouraged. Locally, 50 inches of snow will be possible in the highest elevations and 1 to 3 feet of snow are likely across many of the mountains.
Another wet storm is forecast to arrive on the West Coast by Tuesday.

Mild weather settles into central US

Meanwhile, in the central U.S., it will be another mild day on Saturday. Temperatures across parts of the high plains and into parts of the upper Midwest are forecast to be 10 to 20 degrees above average.
Considering it is nearing the coldest time of the year in much of the Northern Hemisphere this mild weather pattern is notable.
It looks like the pattern will keep in place through much of the upcoming week. There are no major cold blasts in sight for much of the country through at least the middle of the month.
Copyright © 2019, ABC Radio. All rights reserved.