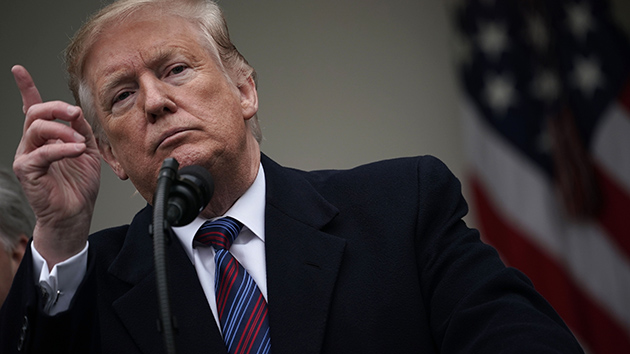 Alex Wong/Getty Images(WASHINGTON) — President Donald Trump and his senior staff are headed on a group vacation — all at the direction of new acting Chief of Staff Mick Mulvaney.
White House senior staffers will spend the weekend at Camp David in Hauvers, Maryland, a rural retreat for the office of president.
Trump will visit the retreat and lead meetings, but only on Sunday.
"Acting Chief of Staff Mick Mulvaney invited White House Senior Staff to Camp David for a staff retreat to lay out the administration's 2019 priories. President Trump will join the team and lead meetings on Sunday," White House press secretary Sarah Sanders said in a statement.
Camp David is a little over an hour drive north from Washington.
Trump has made it a habit of going to his properties in Mar-a-Lago, Florida, and Bedminster, New Jersey, when looking to get away from the capital, but he has visited Camp David on occasion. He made his first visit to the camp in June 2017 and visited the retreat four more times in his first year in office.
It is not clear which staffers will be making the hike, though Vice President Mike Pence, son-in-law and senior adviser Jared Kushner and Homeland Security Secretary Kirstjen Nielsen will not be visiting. The three will instead continue to negotiate with congressional leaders in a bid to end the partial government shutdown, which enters its 15th day on Saturday.
Trump has continued to assert he will not settle for any deal from Congress that does not include at least $5 billion in funding for his proposed border wall between the U.S. and Mexico. He threatened to keep the government shuttered for over a year on Friday.
There are no signs Democrats, which now control the House, are willing to budge on giving in to Trump's demands.
About 380,000 federal workers have been furloughed, while another 420,000 are working without pay due to the shutdown.
Copyright © 2019, ABC Radio. All rights reserved.