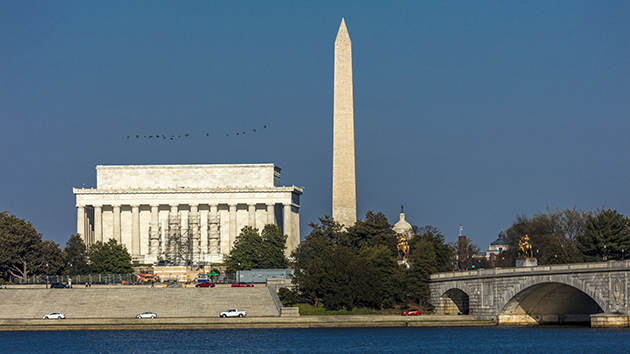 Visions of America/UIG via Getty Images
Posted on January 5, 2019 by ABC News

Visions of America/UIG via Getty Images(WASHINGTON) — With the government shutdown entering its third week, negotiations between Republicans and Democrats continue as President Donald Trump demands funding for a border wall.

But after a nearly two-hour meeting and briefing by Nielsen that was described as "productive" by the vice president, an agreement has still not been reached. On Sunday, the working group plans to head back over to the Eisenhower executive office building for another round of negotiations.

The Democrats requested specific details in writing of Department of Homeland Security needs from the White House, according to a Democratic aide.

Currently, negotiations remain at an impasse as the president said he will not budge on his request for $5.6 billion in funding for a border wall.

During an unplanned press conference in the Rose Garden of the White House after a closed-door meeting with Democratic and Republican leadership Friday, President Trump said he is prepared to keep the government shut down for "a very long period of time, months or even years" in order to get border wall funding.

Following the meeting, Democrats said the president ignored their pleas to reopen the government as negotiations continue.

The stalemate has frustrated lawmakers and federal workers. Currently, over 800,000 federal workers are working without pay or have been sent home to wait for possible back pay. The consequences are being felt by civilians, too — museums are closed, trash is piling up in parks, and vital, government-backed resources for farmers or housing, for example, are frozen.

Trump dismissed furloughed federal workers in a tweet on Saturday, writing: "I don’t care that most of the workers not getting paid are Democrats, I want to stop the Shutdown as soon as we are in agreement on Strong Border Security! I am in the White House ready to go, where are the Dems?"

I don’t care that most of the workers not getting paid are Democrats, I want to stop the Shutdown as soon as we are in agreement on Strong Border Security! I am in the White House ready to go, where are the Dems?

During his Rose Garden press conference Friday, the president was asked about his message for furloughed federal workers. He said that negotiations for a border wall take priority, adding that he believes that federal works "agree with what we're doing."

President Trump also tweeted that ending the shutdown "would be so easy to do" if Democrats would approve "REAL Border Security" that includes the wall and claims there is support from both sides.

Great support coming from all sides for Border Security (including Wall) on our very dangerous Southern Border. Teams negotiating this weekend! Washington Post and NBC reporting of events, including Fake sources, has been very inaccurate (to put it mildly)!

Coming out of the second meeting in the White House Situation Room with the president on Friday, Democrats said the discussions were "contentious." While Trump has continued to demand money for the border wall, Democrats say they are not willing to allocate any additional funds. Instead, Democrats have asked the president to reopen the government while the talks about border security continue.

House Speaker Nancy Pelosi, who recaptured the speaker's gavel on Thursday, did not sound optimistic when she was asked how she would define the progress from the meetings.

"How do you define progress when you have a better understanding of each other's position? When you eliminate some possibilities? If that's a judgment, then yes, we made progress," she said before turning on her heels to leave the White House with her fellow Democrats.