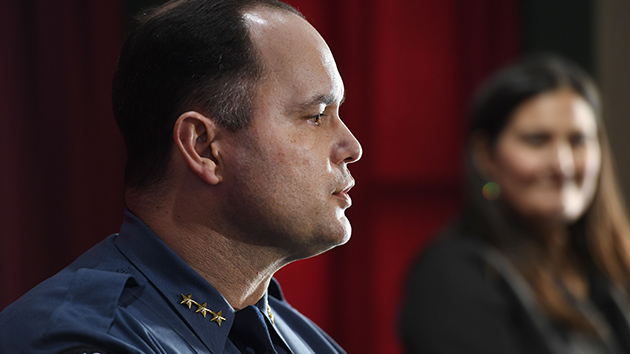 Andy Cross/The Denver Post via Getty Images(WOODLAND PARK, Colo.) — The parents of missing Colorado mom Kelsey Berreth have filed a wrongful death lawsuit against Patrick Frazee, Berreth's fiance and the man charged with her murder.
This is the first public acknowledgement by Kelsey Berreth’s family of what police first said Dec. 21: She is no longer thought to be alive.
She has not been seen since Thanksgiving Day when she visited a grocery store with her 1-year-old daughter in Woodland Park, Colorado.
Frazee was formally charged with two counts of first-degree murder and three counts of solicitation to commit murder on Dec. 31.
Berreth's body has still not been found.
According to the lawsuit, filed in U.S. District Court in Colorado on Friday, "Upon information and belief, Frazee committed and/or collaborated to commit the murder of Kelsey Berreth. This action seeks damages against Frazee for his actions to murder and/or collaboration to murder Kelsey Berreth."
The suit was filed by Kelsey's parents, Cheryl-Lee Berreth and Darrell Berreth, who say through the murder of their daughter they "incurred economic loss and damages, to include but not limited to net pecuniary losses and other economic losses, and non-economic losses and damages, to include but not limited to solatium, grief, emotional distress and suffering, and loss of quality of life."
Berreth's parents request a trial by jury in the lawsuit. It does not specify a dollar amount for damages.

Perry Sanders and Angela Jones, attorneys who represent Berreth's family, said they would not comment on the lawsuit "to protect the integrity of the criminal prosecution."

"We will share all our information with the local, state and federal authorities and no one else until all facts are made public," Sanders and Jones said in the statement. "Our federal lawsuit speaks for itself and we will not add any detail at this time."

The lawsuit also details Frazee's alleged abuse leading up to the murder, saying he "enacted physical, mental, and emotional acts of violence upon Kelsey Berreth prior to her death," according to the lawsuit.
Kelsey Berreth has not been seen since surveillance video captured her entering a Safeway grocery store with the couple's 1-year-old daughter on Nov. 22. She then dropped off the child with Frazee, and left, according to him.
She wasn't reported missing until 10 days later when Cheryl-Lee Berreth called police. The couple's child is currently being cared for by Berreth's parents.
Frazee was arrested Dec. 21, though details of what led police to arrest him have not been disclosed.
Affidavits in the case have been sealed by the court.
Sources told ABC News earlier this week that a woman in Idaho is being investigated for possibly disposing of Kelsey Berreth's cellphone following her murder. The woman, a 32-year-old nurse from Twin Falls, Idaho, has not been charged with any crime and it is unclear what her relationship is to Frazee.
Kelsey Berreth's cellphone pinged in Twin Falls on Nov. 25, three days after her disappearance, and a text message was sent to her employer the same day saying she would not be coming into work that week, according to police.
Frazee made a brief court appearance on Friday where he was granted the opportunity to see the arrest affidavit, however, it will still be sealed to the public. Senior Deputy District Attorney Jennifer Viehman said following the appearance that testing is still being done on evidence collected in the case.
A preliminary hearing scheduled for Jan. 29 was also postponed on Friday, as both sides agreed there was no need to rush the investigation. Frazee will now be back in court on Feb. 19 at 9 a.m.
Copyright © 2019, ABC Radio. All rights reserved.