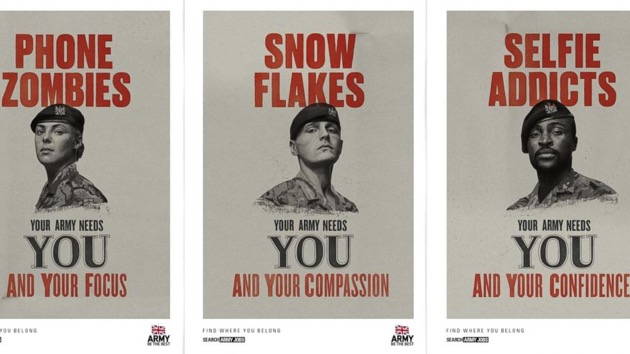 Ministry of Defence
Posted on January 4, 2019 by ABC News

Ministry of Defence(LONDON) — The British Army has launched a new recruitment campaign targeting a range of millennial stereotypes, including “snowflakes” and “selfie addicts.”
The campaign uses the template of a famous World War I propaganda poster to make its point. The classic poster featured then-British Secretary of State for War, Lord Kitchener, with the text: "Britons: Lord Kitchener Wants You. Join Your Country's Army! God save the King."
The new posters and TV ads say the army needs the “drive” of “binge gamers,” the “focus” of “phone zombies,” the “self-belief” of the “me me me millennial” and the “compassion” of “snowflakes.” Millennials are generally defined as people born born between 1981 and 1996, according to the Pew Research Center.
One recruitment ad features a video of a young woman working in a supermarket, who is decried by her bosses as a “lazy millennial” but is able to use her “perfectionist” qualities as a member of the armed forces.
Another shows a video gamer staying up all night, which the army say is a sign of “stamina” and “dedication.”
The recruitment drive has garnered some mixed reactions on social media, however. Labour politician Sarah Hayward said that the British Army was “insulting young people,” describing it on Twitter as "an awful campaign."
But Glenn Houghton, a senior British soldier, praised the campaign in a tweet, suggesting it was a sign that the military were adapting to the new realities of the 21st century.
"When I joined there were only 4 TV channels, I don’t remember any Army adverts. It was illegal to be gay and you couldn’t guard Buckingham Palace if you were black. Thank God times have changed, as has the Army and the audience they are targeting. Good job," he wrote on Twitter.
The campaign follows a number of measures that have sought to improve the diversity of the British armed forces in recent years.
In October 2018, for example, Defense Secretary Gavin Williamson announced that all military roles would be open to women, which he said would “maximize the talents available to our military and further make the armed forces a more modern employer.”
But one recruitment tactic has proved especially controversial.
In June 2018, The Guardian reported that the British Army had advertised recruitment material on social media to 16-year-olds around the time they were finishing their national exams, a move that was criticized by some as exploiting their anxieties about the test results.
Copyright © 2019, ABC Radio. All rights reserved.

It’s not me, it’s ‘You’: Penn Badgley and Victoria Pedretti shed light on their character’s season 3 motivations
Michael Keaton’s new Hulu limited series ‘Dopesick’ is guaranteed to make you angry
Gonzo, Miss Piggy and Yvette Nicole Brown want to help you face your fears in ‘﻿Muppets Haunted Mansion’
Child killed in Alabama flooding: Latest forecast
New driver license program expands option for visually impaired
What is retinol and should you be using it?