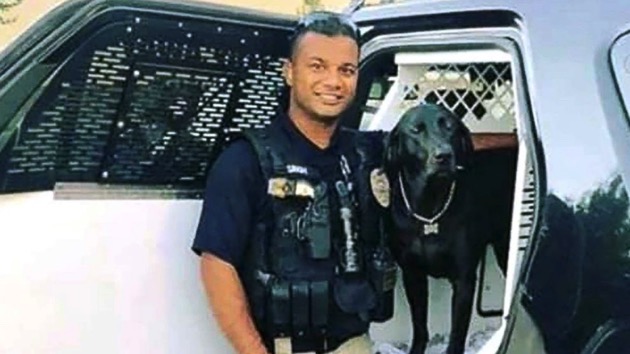 Merced Police Department(NEWMAN, Calif.) — Slain California police officer Ronil Singh will be recognized with a solemn procession and honor guard visitation on Friday.
Cpl. Singh, 33, a native of Fiji who dedicated his life to law enforcement, was shot dead in the line of duty early on Dec. 26.
President Donald Trump — who tweeted about the case when authorities said the suspected killer was an undocumented immigrant — spoke with Singh's family and local California law enforcement officers on Thursday, said White House press secretary Sarah Sanders.
The suspect, Gustavo Perez Arriaga, fled after shooting Singh at a traffic stop, according to the Stanislaus County Sheriff's Department. Arriaga was arrested two days later in Bakersfield, California, 200 miles south of where the alleged crime took place. Arriaga, an undocumented immigrant, was allegedly trying to flee to Mexico, authorities said.
Singh had been with the Newman Police Department since July 2011, the sheriff's office said. He previously served with the Merced County Sheriff’s Department, according to California Gov. Jerry Brown.
Singh leaves behind a wife and 5-month-old son.
"This is a man that I saw every day he worked," an emotional Newman Police Chief Randy Richardson said of Singh. "This is a man that I relieved on Christmas Day so he could go home and spend some time with his family and his newborn child."
"He truly loved what he did," added Richardson. "You've never seen a man smile more than him."
Singh's funeral will take place Saturday.
At his arraignment Wednesday, Arriaga told the judge that his real name is Paulo Virgen Mendoza and that Gustavo Arriaga is one of his aliases, ABC San Francisco station KGO reported. At least three aliases were listed on Arriaga's criminal complaint.
Several others have been arrested for allegedly helping Arriaga.
Arriaga did not enter a plea during the hearing and his attorney questioned his mental competency, according to KGO. The case has been suspended until he receives a mental health evaluation.
Copyright © 2019, ABC Radio. All rights reserved.