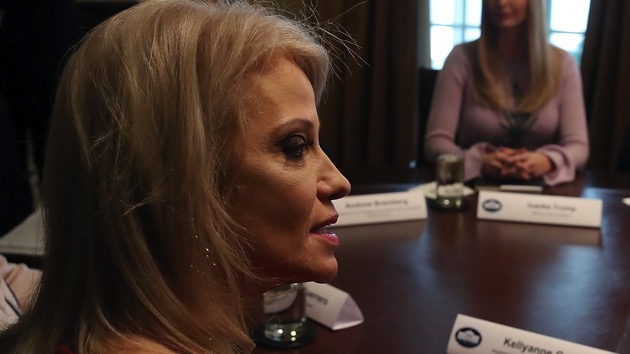 Mark Wilson/Getty Images(WASHINGTON) — President Trump and the White House are seeking to shift blame for the partial government shutdown after Trump said last month he would be proud to own a shutdown in order to secure funding he has demanded to border a southern border wall.
Counselor to the president Kellyanne Conway argued that President Trump no longer bears responsibility for the current stalemate that's resulted in the closure of approximately a fourth of the federal government, impacting 800 thousand federal workers.
“He doesn't own the shutdown any longer,” Conway said when asked if the president regrets his past statement willingly taking the blame.
Conway argued that because the House of Representatives passed a package last month that included the president’s requested $5.6 billion in funding, the buck now passes to the Senate.
"He doesn't own the shutdown any longer. The House voted, the House did its job. The House passed a 5.6 billion border security funding, and it's not just for a wall it's for border security, and now the Senate has to do its job," Conway said.
But the $5.6 billion measure that passed the House was dead on arrival in the Senate, and therefore stood no realistic chance of ever reaching the president's desk.
In his latest argument in placing blame on Democrats shoulders, President Trump tweeted Thursday morning that the shutdown could be explained by the 2020 presidential election and Democratic efforts to stall his administration, citing it as an example of "presidential harassment."
Democrats deny that their motives are political in the current stalemate over funding the government but are instead about their firm opposition to funding the president's desired border wall. And with the Democrats set to formally take control of the House Thursday, incoming House Speaker Nancy Pelosi, D – Calif., said the House plans to vote on votes for two alternative bills that would reopen the government and once had the backing of Republican senators.
"Our question to the president and to the Republicans is, why don't you accept what you have already done to open up government, and that enables us to have 30 days to negotiate for border security?" House Democratic Leader Nancy Pelosi asked Wednesday following a meeting with President Trump at the White House.
"Democrats have been committed to protecting our borders. It's the oath of office we take to protect and defend. It has been very important to us, and we have committed resources to it."
The first bill they're planning to vote on includes year-long funding plans for every government agency currently closed, with the exception of the Department of Homeland Security. The second bill would reopen and fund DHS through Feb. 8 and continue current funding of $1.3 billion for border security.
"We asked him to give us one good reason — I asked him directly. I said, Mr. President, 'give me one good reason why you should continue your shutdown of the eight cabinet departments while we are debating our differences on homeland security?' He could not give a good answer. So we would hope that they would reconsider and would support the very bills that pass the Senate," said Democratic Leader Sen. Chuck Schumer of New York.
Copyright © 2019, ABC Radio. All rights reserved.