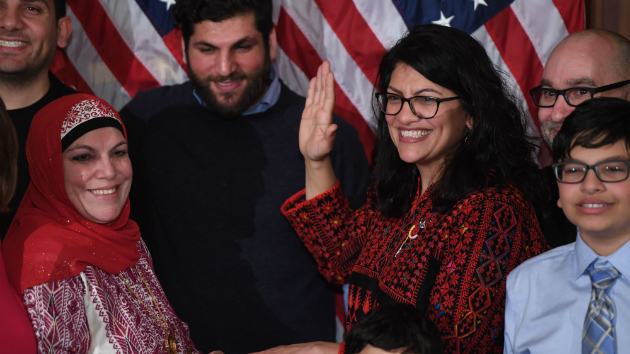 SAUL LOEB/AFP/Getty Images(WASHINGTON) — It didn't take long for new Congresswoman Rashida Tlaib to introduce herself to President Donald Trump and the nation. And she did so in the most profane way possible.
Tlaib, who was sworn in as Michigan's representative from the 13th Congressional District on Thursday afternoon, was speaking at an event for progressive advocacy group MoveOn.org when she relayed a conversation with her son to the crowd: "And when your son looks at you and says, 'Momma, look you won, bullies don’t win,' and I said, 'Baby they don't,' because we’re gonna go in and impeach the motherf—–."
The 20-second clip of Tlaib's profane declaration, which was shared on Twitter by Nestor Ruiz, a digital organizer for immigrant advocacy group United We Dream, quickly made the rounds Thursday night. Several journalists in attendance at the event also confirmed she made the comment.
The call for impeachment earned raucous applause, according to the video. ABC News has reached out to MoveOn.org for comment.
Tlaib, a mother of two, has called for the president's impeachment in more-restrained language previously, including in an op-ed for the Detroit Free Presson Thursday.
"President Donald Trump is a direct and serious threat to our country. On an almost daily basis, he attacks our Constitution, our democracy, the rule of law and the people who are in this country," she wrote in the op-ed, with a byline shared by John Bonifaz, co-founder of Free Speech for People.
"Each passing day brings more pain for the people most directly hurt by this president, and these are days we simply cannot get back. The time for impeachment proceedings is now," the column concludes.
The organization Free Speech for People has routinely pushed to start proceedings to impeach Trump.
New House Speaker Nancy Pelosi has been hesitant to talk impeachment in relation to the president. In an interview on NBC's Today, hours before being named speaker, she hedged and said she preferred to wait until special counsel Robert Mueller wraps his investigation into Russian meddling in the 2016 election — a delay Tlaib specifically said was unnecessary.
"We have to wait and see what happens with the Mueller report," Pelosi told Today on Thursday morning. "We shouldn't be impeaching for a political reason, and we shouldn't avoid impeachment for a political reason. So we'll just have to see how it comes."
The 42-year-old Tlaib has garnered attention as being part of a new crop of progressive lawmakers pushing the Democratic Party further left. Tlaib and Rep. Ilhan Omar, D-Minn., both sworn in Thursday, are the first two Muslim-American congresswomen in history.
Tlaib and Omar join Reps. Ayanna Pressley, D-Mass., Alexandria Ocasio-Cortez, D-N.Y., Sharice Davids, D-Kan., and Deb Haaland, D-N.M., as minority women newly elected to the 116th Congress.
Pressley is the first-ever black congresswoman from Massachusetts, Ocasio-Cortez is the youngest woman ever elected at 29, and Davids and Haaland are the first two Native American women elected to Congress.
Copyright © 2019, ABC Radio. All rights reserved.

Out of the Shadows: Christopher Steele defiant on dossier, says Trump still ‘potential’ threat
Biden embraces Trump accords, but struggles with his withdrawal from Iran nuclear deal amid growing threat
Trump must give videotaped deposition in protest lawsuit, judge orders
Gymnasts call on Congress to dissolve US Olympics board over Larry Nassar case
White House pushes for release of Jan. 6 documents as Trump, Bannon rebuff committee
Timothée Chalamet dodges questions about ‘Call Me By Your Name’ co-star Armie Hammer controversy