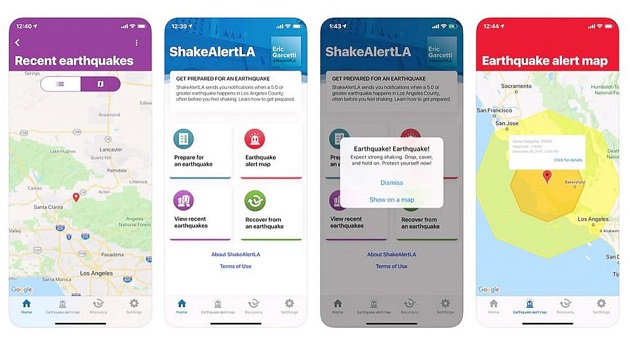 Eric Garcetti/Twitter(LOS ANGELES) — A new app will now alert Los Angeles residents seconds before a large earthquake strikes the city and surrounding area.
ShakeAlertLA app, developed by LA Mayor Eric Garcetti in partnership with AT&T and United States Geological Survey, was released on Dec. 31.
Users will receive a push alert, similar to an Amber Alert, 10 to 20 seconds before a major earthquake hits.
An alert could say: "EARTHQUAKE, EARTHQUAKE, EXPECT STRONG SHAKING. DROP, COVER, AND HOLD ON. PROTECT YOURSELF NOW!"
“Earthquakes are a matter of when—not if," Garcetti said in a Twitter post Thursday.

Earthquakes are a matter of when — not if. We're officially launching #ShakeAlertLA tomorrow, and today you can become one of the first to use our early warning technology.
Download the app here → https://t.co/ePpzodn53p pic.twitter.com/XMc1aqUP90

"Angelenos should have every chance to protect themselves and their families when there's a major earthquake," he also said in a press release. "We created the ShakeAlertLA app because getting a few seconds' heads-up can make a big difference if you need to pull to the side of the road, get out of an elevator, or drop, cover, and hold on."
The app is the nation’s first publicly available mobile earthquake warning system but is only effective for Los Angeles County. Garcetti hopes to expand the app's capabilities to the entire state of California.
The app’s release comes after a decade of research by the USGS and a $260,000 donation from the Annenberg Foundation in 2017.
“Earthquakes are a fact of life in Los Angeles, a challenge we'll always have to face. That's why early earthquake warnings must also be a fact of life — on our phones and on our tablets the very moment they're available,” Wallis Annenberg, the CEO and president of the Annenberg Foundation, said in a statement.
The last earthquake above 5.0 that affected Southern California occurred on Aug. 5, 2018, near the Channel Islands. The quake was logged as a 5.3 but caused no major damage because its epicenter was located in the water off the coast rather than on land. Some areas of Los Angeles still felt the shocks.
Copyright © 2019, ABC Radio. All rights reserved.