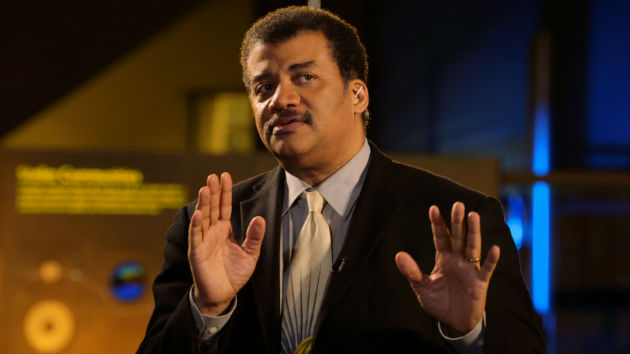 Photo credit: National Geographic Channels(NEW YORK) — National Geographic Channel has put its long-running Neil deGrasse Tyson talk show StarTalk on hiatus until further notice, pending the results of an investigation into sexual misconduct allegations against him.
The show, which features the famed astrophysicist chatting about science with guests, was pulled from the air just three episodes into its fifth season, which premiered November 12, after multiple allegations surfaced.

A publicist for Nat Geo told ABC News, "We chose to hold new episodes of StarTalk until the investigation is completed.” The rep also confirmed their statement as reported by Variety that they expect their investigation to be concluded, "in the next few weeks, at which time we’ll make a final decision."

New allegations against Tyson surfaced late November after two women accused him of inappropriate sexual behavior in a story posted on Patheos.

Bucknell University’s Dr. Katelyn N. Allers claimed Tyson groped her at an event in 2009, while a former assistant, Ashley Watson, alleged Tyson made repeated inappropriate sexual advances toward her, according to the website.

Tyson also had previously been accused of sexual misconduct by musician Tchiya Amet, who claims Tyson raped her when they were both graduate students in the 1980s.

Tyson denied the allegations in a lengthy December 1 Facebook post titled "On Being Accused," writing in part: “In any claim, evidence matters. Evidence always matters. But what happens when it’s just one person’s word against another’s, and the stories don’t agree? That’s when people tend to pass judgment on who is more credible than whom. And that’s when an impartial investigation can best serve the truth — and would have my full cooperation to do so.”

Tyson has since canceled several appearances scheduled for this month in Orlando, Jacksonville, and Boca Raton, Florida.