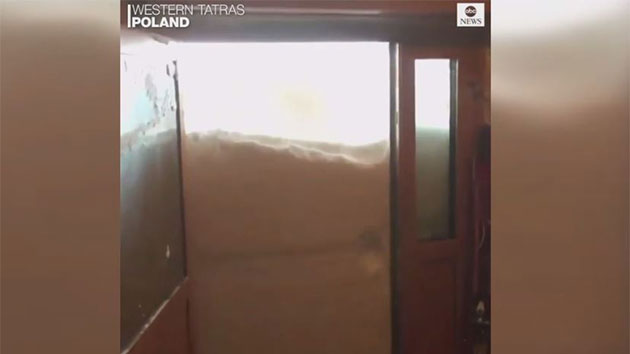 ABCNews.com(NEW YORK) — A few feet of snow in the weather forecast may be enough to keep many people inside, but a group of meteorologists dug through a snowdrift to escape a weather station in Poland and report the weather.

In a video that's captured a lot of attention, one of the meteorologists can be seen opening the door to reveal fresh snow, while another one dressed in ski attire can be seen throwing a pair of skis and ski poles onto the top of the snow. That same meteorologist is then seen jumping and attempting to dig away at the snow, with much of the snow landing inside the station.

After digging away just enough snow, the meteorologist is eventually able to find his footing on a slightly-elevated level of snow and continue to dig the way out. The video also shows the same meteorologist later standing on top of the snow as heavy snowfall makes it difficult to see anything.

Not even a wall of snow could stop them from getting outside to report the weather!