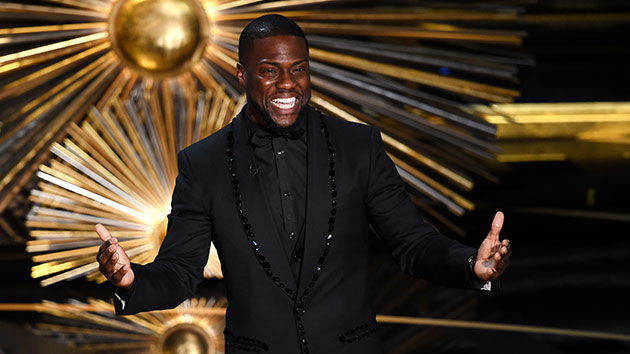 Kevin Winter/Getty Images(NEW YORK) — In an hour-long appearance on The Ellen DeGeneres Show, airing today, Kevin Hart revealed that he's "evaluating" his decision not to host the Oscars after DeGeneres called the Academy of Motion Picture Arts and Sciences, asking them to reconsider their position.

Hart was announced as the host of the Oscars the first week of December. Then a day later, someone unearthed and circulated homophobic tweets the actor and comic made in 2008. The Academy asked Hart to apologize but Hart declined, saying he'd already done so numerous times, and stepped down from hosting the Oscars.

Ellen, herself a two-time Oscar host, revealed during Friday's interview that she called the Academy to get their thoughts on Hart possibly returning as host.

“They were like, “Oh my God, we want him to host!" Ellen said was the Academy's response. "We feel like that maybe he misunderstood or it was handled wrong. Maybe we said the wrong thing but we want him to host. Whatever we can do we would be thrilled. And he should host the Oscars.”

Hart still had his reservations about returning, explaining, "It's tough for me because it was an attack. This wasn't an accident…I'm on social media every day. I've got over 40,000 tweets. To go through 40,000 tweets to get to 2008…that's a malicious attack on my character…This was to destroy me."

Hart went on to say he's "tired of the conversation" over his tweets because he's not the same man he was when he tweeted the homophobic comments. "Either my apology is accepted, or it isn't," Hart said. "Either I can move forward, or I can't."

DeGeneres, who came out as gay in 1997, defended Hart by saying, “As a gay person…I am sensitive to all of that…You’ve already expressed that it's…not realizing how dangerous those words are, not realizing how many kids are killed for being gay or beaten up every day. You have grown, you have apologized…Don’t let those people win — host the Oscars.”

Earlier, Ellen explained that she first spoke with Hart about hosting the Oscars after she hosted the ceremony for the second time in 2014, and that's when she learned it was a dream of his to host the show one day.

In another clip obtained by Variety, Hart ended the interview by saying, "Leaving here, I promise you, I'm evaluating this conversation…let me assess, just to sit in this space and really think, and you and I will talk before anything else."

Hart was appearing on the show to promote his latest movie The Upside, opening nationwide January 11.