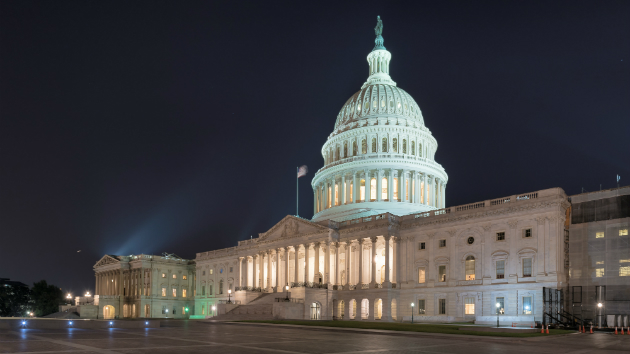 lucky-photographer/iStock(WASHINGTON) — House Democrats took their first major legislative votes of the new Congress, approving two measures to end the 13-day partial government shutdown — despite a presidential veto threat.
Though both measures are expected to stall in the Senate, newly minted House Speaker Nancy Pelosi ruled out approving any funding towards the president’s $5.6 billion request for a physical barrier at the southern border — renewing the impasse that led to the shutdown last month.
"We are not doing a wall. Does anybody have any doubt? We are not doing a wall," Pelosi, D-California, said, dubbing President Donald Trump as a “master of diversion.”
In light of the newly divided government, Thursday’s votes set down a legislative marker for the House of Representatives, but did not produce a bipartisan resolution to the border wall stalemate or bring the shutdown any closer to its end.
“The fact is a wall is an immorality. It's not who we are as a nation,” Pelosi said. “It’s a wall between reality and his constituents, his supporters."
A vote on a package of six appropriations bills late Thursday night passed 241-190, while lawmakers also approved a narrow measure to extend funding for the Department of Homeland Security until Feb. 8 by a tally of 239-192.
“As Representatives, funding the federal government is one of our most important duties,” House Appropriations Chairwoman Nita Lowey, D-New York, said on the House floor during debate on the bills. “When Congress allows a president to dictate ridiculous demands and lets petty partisanship prevent the timely passage of appropriations bills, we abdicate that responsibility. Our new Democratic majority was elected to end the chaos and govern responsibly.”
Prior to the votes, Trump made a surprise appearance in the White House briefing room on Thursday afternoon to underscore his demand for the border wall, asserting that “without a wall, you cannot have border security.”
“You can call it a barrier. You can call it whatever you want,” Trump said. “But essentially, we need protection in our country. We're going to make it good. The people of our country want it.”
Separately, the White House signaled Thursday that the president would veto either measure if the legislation reached the Resolute Desk.
"The Administration has made it clear that the Government needs an investment of at least $5 billion for border security, along with the flexibility necessary to utilize these funds efficiently,” a statement of administration policy stated. “The appropriations bill, H.R. 21, and the corresponding H.J. Res. 1, does not come close to providing these necessary investments and authorities."
Congressional leaders were slated to meet with Trump at 11 a.m. Friday to resume negotiations, though neither side appears ready to cave.
Senate Majority Leader Mitch McConnell has also pledged to block the measures from a vote in the upper chamber.
“The Senate will not take up any proposal that does not have a real chance of passing this chamber and getting a presidential signature,” McConnell, R-Kentucky, said. “Let’s not waste the time. Let’s not get off on the wrong foot, with House Democrats using their new platform to produce political statements rather than serious solutions.”
While Trump said last month that he would be proud to own a shutdown in order to secure funding he has demanded to build a southern border wall, counselor to the president Kellyanne Conway argued that the president no longer bears responsibility for the shutdown that's resulted in the closure of approximately a quarter of the federal government, impacting 800,000 federal workers.
“He doesn't own the shutdown any longer,” Conway said when asked if the president regrets his past statement willingly taking the blame.
She argued that because the House of Representatives passed a package last month that included the president’s requested $5.6 billion in funding, the buck now passes to the Senate. That measure expired with the end of the 115th Congress earlier Thursday.
"He doesn't own the shutdown any longer. The House voted, the House did its job. The House passed a 5.6 billion border security funding, and it's not just for a wall it's for border security, and now the Senate has to do its job," Conway said.
Trump tweeted Thursday morning that the shutdown could be explained by the 2020 presidential election and Democratic efforts to stall his administration, citing the showdown as an example of "presidential harassment."
The broader measure includes funding for the remainder of the fiscal year for every government agency currently closed, with the exception of agencies within the Department of Homeland Security. The second bill would fund DHS through Feb. 8 at the current funding rate of $1.3 billion for border security.
"We asked him to give us one good reason — I asked him directly. I said, Mr. President, 'give me one good reason why you should continue your shutdown of the eight cabinet departments while we are debating our differences on homeland security?' He could not give a good answer. So we would hope that they would reconsider and would support the very bills that pass the Senate," said Senate Minority Leader Chuck Schumer of New York.