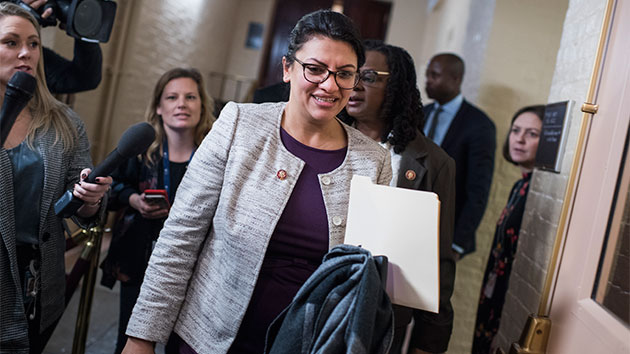 Tlaib, who was sworn in as Michigan's representative from the 13th Congressional District on Thursday, spoke at an event hours later for progressive advocacy group MoveOn.org where she relayed a conversation with her son to the crowd: "And when your son looks at you and says, 'Momma, look you won, bullies don’t win,' and I said, 'Baby they don't,' because we’re gonna go in and impeach the motherf—–."

At a news conference in the Rose Garden Friday afternoon, Trump ripped into Tlaib.

“I thought her comments were disgraceful,” Trump said. “This is a person that I don't know. I assume she's new. I think she dishonored herself and I think she's dishonored her family. Using language like that in front of her son and whoever else was there, I thought that was a grave dishonor to her and to her family. I thought it was highly disrespectful to the United States of America.”

Trump also dismissed the notion that he should face impeachment and said Pelosi assured him that House Democrats are not pursuing impeachment.

A Pelosi spokesman clarified in a tweet that Trump initiated the discussion about impeachment and Pelosi worked to steer the conversation back towards ending the shutdown.

Although Pelosi has balked at questions about impeachment previously, she says her responsibilities as speaker don't include being the censorship police, either.

"I probably have a generational reaction to it, but in any event, I'm not in the censorship business," Pelosi told MSNBC in a town hall meeting taped Friday morning. Pelosi also deflected questions from reporters pining for reaction to Tlaib’s word choice, creating a headache for Pelosi on Day 2 of her speakership.

The California Democrat’s indifference to Tlaib’s rhetoric stoked condemnation from Republican leaders, who prodded Pelosi to rein in members of her caucus.

“Are Speaker Pelosi or Steny Hoyer going to say anything about their freshmen?” House Minority Leader Kevin McCarthy, R-Calif., wondered. “I know she wanted to double down about this, but is this the behavior that we’re going to find with this new majority party here in Congress or are they going to govern the way they said they wanted to govern?”

“She is the Speaker of the House.” McCarthy continued. “She has a new freshman incoming individual that uses that type of language, has a determination of what she’s going to do with no facts and the basis. I think this is a role as a leader and the speaker to have a conversation with this member on whether she approves of this or not.”

Rep. Liz Cheney, the House Republican Conference chairwoman and daughter of former Vice President Dick Cheney, said Tlaib’s profanity represents “a real ramp-up in rhetoric and name-calling and the kinds of politicization and partisanship the American people are sick and tired of.”

“You’ve had name-calling. You’ve had references to Hitler. You’ve had very foul language used and accusations of the necessity to impeach,” Cheney, R-Wyo., decried. “So we’re in a situation where the Democrats are clearly bringing into this office as they take charge, a level of rhetoric, a level of attack, a level of vitriol that’s not good for the country.”

Pressed about Trump’s own controversial remarks over his first two years in office, McCarthy claimed Republicans spoke out frequently against the president, and worked in the 115th Congress in a bipartisan fashion to craft a resolution to work together and abstain from foul language.

“I think a lot of them did in that process,” McCarthy said without citing any examples.

Cheney, whose father famously told Vermont Democratic Sen. Patrick Leahy to “go f— yourself” in hot-mic comments picked up on the Senate floor in 2004, also denied that Trump is complicit.

“If you just look at what we’ve seen, again – and I’m not going to repeat the allegations because frankly I don’t want my kids to hear them – but you have seen over the last 24 hours very foul language,” Cheney said. “I think any comparisons to Hitler, to Nazism are absolutely outrageous.”

As he prepared for a bipartisan meeting at the White House, McCarthy signaled that Tlaib’s comments potentially spoil any prospects of bipartisanship in the 116th Congress.

“How do you work with anybody if this is what they really have planned?” McCarthy said in reference to impeachment. “We watched a new freshman stand up, use this language, get cheered by their base and we watched a brand new speaker say nothing to her.”

“That is not the body of what we serve in and that action should not stand. Somebody should stand up to it,” he continued. “She’s the speaker. That individual serves in her caucus. I would hope if she wouldn’t others in her caucus would.”

House Majority Leader Steny Hoyer said Tlaib should not face any formal discipline from the House of Representatives and pointed back at Trump for creating a toxic political atmosphere.

“There is a lot of heated discussion going on. We’ve gotta get the level down, get the government open,” Hoyer, D-Md., told reporters at the Capitol on Friday. “Nobody has heightened it more than the President of the United States in terms of rhetoric he has used over the last two or three years.”

House Minority Whip Steve Scalise, who was nearly assassinated by a gunman in 2017, repeated his call “for civility on both sides” – while pointing out that Republicans never attempted to impeach Barack Obama despite clamoring from the GOP base.

“When we disagreed with Barack Obama, it was on the policies. We didn’t get into that kind of name calling and when people said things that were inappropriate, we called them out,” Scalise told ABC News in a brief hallway interview at the Capitol. “Pelosi’s got her first test and it happened on Day 1: How is she going to stand up to the most radical left elements of her party when they become unhinged?”

House Oversight and Government Reform chairman Elijah Cummings, a Maryland Democrat, conceded that Tlaib’s are “inappropriate” and could serve as a distraction from the Democratic agenda.

"You cannot accomplish very much of anything unless you have civility and show respect for your colleagues and I think those kind of comments do not take us in the right direction,” Cummings said.

Rep. Gerald Connolly said the mandate of the Democratic majority is to restore oversight and accountability in the executive branch – though not necessarily race to impeach Trump.

“The "i-word" is not front and center in this Congress at this moment,” Connolly, D-Va., said. “That's the comment of a new member, in an excess of enthusiasm before an audience. I don't think it reflects how the Congress, the majority of the Congress is going to approach the subject of any investigation including possible impeachment.”

In Tlaib, Democratic Rep. Brad Sherman, who already introduced Articles of Impeachment against the president on Day 1, may have a new ally in his quest for impeachment.

"I think I have 200, 300 million allies who feel that the president is not doing a good job and the country would be better off if he was not in the White House,” Sherman, D-Calif., quipped.

House Financial Services chairwoman Maxine Waters, a frequent target of partisan attacks from the president, said Trump – not Tlaib – should be held accountable for his language, and cautioned that any impeachment process would be methodical – not instantaneous.