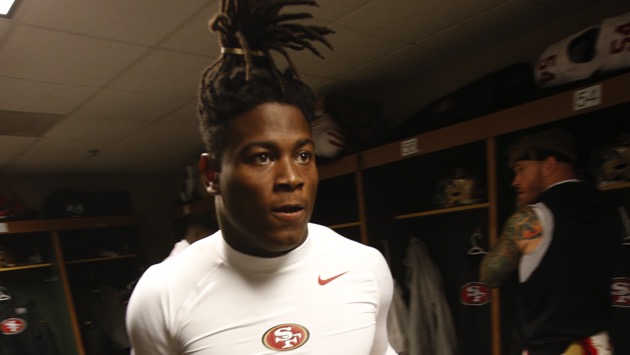 Michael Zagaris/San Francisco 49ers/Getty Images(TAMPA, Fla.) — The domestic violence charge pending against Washington Redskins linebacker Reuben Foster has been dropped.
The State Attorney's Office dropped the misdemeanor charge, which stemmed from an incident in Tampa, Fla., between Foster and his ex-girlfriend on the night of Nov. 24, according to a Hillsborough County filing. Prosecutors said evidence in the case was insufficient to follow through with the charge.
Foster was due to appear for his arraignment on Thursday before the charge was dropped.
Police in Tampa had said at the time of the incident that Foster and Elissa Ennis were involved in a verbal altercation when "Foster slapped her phone out of her hand, pushed her in the chest area, and slapped her with an open hand on the left side of her face."
Ennis later told her story to ABC's Good Morning America in December.
"We're disappointed. The prosecutor's choice is yet another slap in the face to Miss Ennis, just like the one Mr. Foster gave her in Tampa," Ennis' attorney, Adante Pointer, told ABC News Thursday. "Elissa Ennis was fully ready to participate and hold him accountable. This is not a situation where she recanted, nor that the prosecutor had new evidence that it didn't happen."
Foster and Ennis had previously been involved in another domestic incident in February 2018. In that case, a domestic abuse charge against Foster was also dropped after Ennis retracted her allegations that the football player had hit her.
Foster was sentenced to two years of probation due to a gun possession charge connected to the February incident.
As for the impact to Foster's football career, Washington had already received criticism after picking up Foster three days after his arrest in Tampa, ESPN reports. He remains on the NFL commissioner's exempt list.
Copyright © 2019, ABC Radio. All rights reserved.