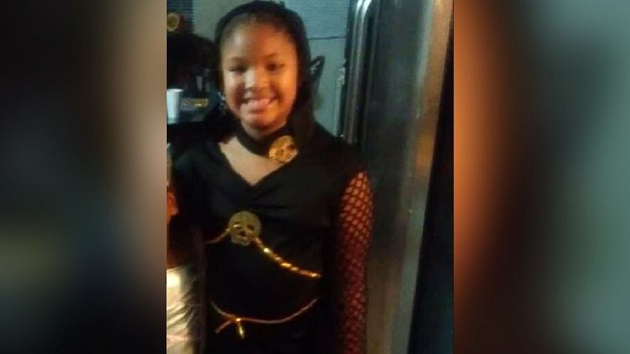 Harris County Sheriff's Office(HOUSTON) — Texas authorities have released a composite sketch of the man they believe killed 7-year-old Jazmine Barnes as she rode in the backseat of a car with her mother and three other siblings in northeast Houston on Sunday.

A gunman opened fire on Jazmine, her mother and three sisters as they traveled southbound on East Sam Houston Parkway around 6:50 a.m. on Sunday, according to the Harris County Sheriff's Office. Jazmine was killed, and her mother, LaPorsha Washington, and younger sister were wounded.
The man is described as having pale skin, blue eyes and a thin build, but the mustache he initially was described to have was likely more of a 5 o'clock shadow, Harris County Sheriff Ed Gonzalez said in a press conference Thursday, noting that the suspect could have easily changed his facial hair by now. He is believed to be in his 30s or 40s and was wearing a black hooded sweatshirt at the time of the shooting.

This is the man witnesses say murdered 7-year-old Jazmine Barnes on 12/30 as her family drove on the E. Sam Houston Pkwy frontage road at Wallisville Road. Thin white man, 30's-40's, in a red pickup. Call 713-221-6000 or @CrimeStopHOU at 713-222-TIPS #JusticeForJazmine #hounews pic.twitter.com/URR3w2Wxbm

The sketch was drawn based on a descriptions provided by Jazmine's family, the sheriff's office said. Law enforcement officers are scouring areas surrounding the shooting scene to find the gunman, who was driving a dark red or maroon pickup truck, Gonzalez said.
Surveillance video taken from a business near the scene shows the suspect's truck driving by shortly before the shooting.
Gonzalez told reporters Thursday that authorities are trying "to find this coward of a killer, this person who does not need to be on our streets."
Jazmine's family believes the shooting was a hate crime, especially since the gunman appeared to have deliberately looked inside both sides of the car before he opened fire, their attorney Lee Merritt told reporters on Thursday. First, he pulled up to the passenger side of the car, then came around to the driver's side, which gave him the opportunity to observe all of the young girls inside, Merritt said.
"We didn't do anything wrong to this man. It was something in his mind that he had planned on doing beforehand," Washington said during a news conference on Thursday afternoon. "This is something that I believe was a hate crime."
No racial slurs were said during the attack, but Merritt said they still believe the shooting was racially motivated for a "litany" of reasons, including the area where it took place and the racial rhetoric currently dividing the nation.
"We won't know until we capture this person and question him about his motive," Merritt said.
Washington told ABC News Thursday that she will never stop looking for the man who killed her daughter. She would have turned 8 next month, Gonzalez said.
Investigators are comparing shell casings from the shooting to other cases to see if there are any connections, an official briefed on the investigation told ABC News.
The reward for information leading to Jazmine's killer had grown to $100,000 by Wednesday.