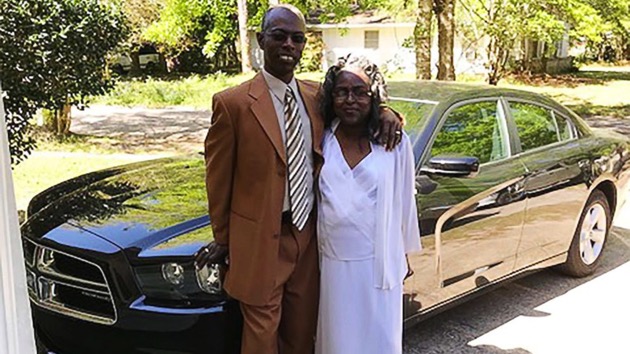 Courtesy of Eddie Drummond
Posted on January 4, 2019 by ABC News

Courtesy of Eddie Drummond(PASCAGOULA, Miss.) — The new year is bringing an extreme act of kindness closer to fruition for one Alabama woman who is waiting for a kidney transplant.
Donnie Drummond's husband, Eddie Drummond, regularly eats breakfast at a grocery store ahead of his early shift at a Mississippi shipyard. His friendship to one of the cashiers, Leilani Aguirre Crocker, has proven to be something of a miracle, she says.
When Crocker noticed that Eddie Drummond was feeling down one day, she asked him what was wrong, and he told her about his wife's ongoing dialysis treatments and her struggle to find a match for a new kidney.
"I couldn't imagine myself being on it," Crocker said of dialysis, "and if the shoe was on the other foot, I'd want somebody to help me."
And that's when Crocker volunteered to give Donnie Drummond her kidney — before even meeting her.
"I really thought she was playing until she told me to set it up with my insurance company," Eddie Drummond told ABC News.
For Donnie Drummond, who had been diagnosed with kidney failure about three years earlier, it was divine intervention. She said that the day before that conversation, she had been blessed by a pastor asking for a kidney match.
Donnie Drummond didn't meet Crocker, 40, until several months later, when she arrived at the Drummond house asking to speak to Eddie Drummond.
What Donnie Drummond didn't know was that "she was my miracle blessing lady."
Crocker and Eddie Drummond surprised Donnie Drumond by capturing the moment when they revealed she was a match on camera.
"I said 'God is so good, I've been praying for a miracle!'" said Donnie Drummond, 53.
Now, the two women and their husbands have become close, having dinners together and going to church together as they have worked through the various tests and steps before the transplant, which is scheduled for February.
Crocker, who is an Army veteran and mother of four, said that "a lot of people won't do this; I don't understand why they wouldn't."
"It's the right thing to do. Something inside of me is telling me to do this," Crocker said. "God works in mysterious ways."
Copyright © 2019, ABC Radio. All rights reserved.

New York woman sues Kellogg’s for $5 million over Frosted Strawberry Pop-Tarts
What to know about Jessica Rosenworcel, who was nominated to become first woman to lead FCC
Teyana Taylor reveals benefits of being away from husband as he competes on ‘Dancing with the Stars’
Ciara celebrates 36th birthday with husband Russell Wilson at the top of Seattle’s Space Needle
Gal Gadot teases that her children will make a cameo in the next ‘Wonder Woman’ movie
Hilaria Baldwin posts about “tragic incident” that left cinematographer dead on husband Alec Baldwin’s film