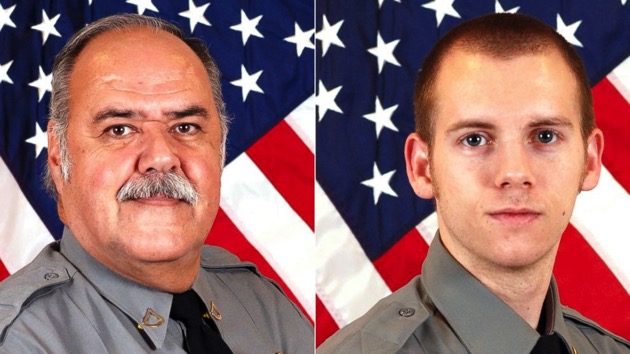 Horry County Sheriffs Office(HORRY COUNTY, S.C.) — Two former South Carolina sheriff's deputies were arrested Friday after two women in their transport van died when they were swept away in Hurricane Florence floodwaters, officials said.
Joshua Bishop, 29, has been charged with two counts of involuntary manslaughter, and Stephen Flood, 66, has been charged with two counts of reckless homicide and two counts of involuntary manslaughter, said the South Carolina Law Enforcement Division (SLED), which is investigating the case.
The Horry County Sheriff's deputies, Bishop and Flood, were assigned to transport the two women, both mental health patients, for treatment on Sept. 18 as water levels were rising from the deadly hurricane, SLED said.
The deputies were told by another officer that a certain route wouldn't be passable because of the water, but Flood took that route anyway, and he drove right into floodwaters, SLED claimed.
Their van stalled out and was swept across the road and up against a guardrail, SLED said, and then the road under them washed away and the van sank into a hole.
Bishop escaped and tried to rescue the women, who couldn't open the doors from inside, but he wasn't able to, according to SLED.
Bishop was able to save Flood and a boat later rescued the officers, SLED said.
Both women, Wendy Newton and Nicolette Green, drowned, SLED said.
Bishop and Flood were fired in October, Brooke Holden, spokeswoman for the Horry County Sheriff’s Office, told ABC News. She declined to comment further, deferring to SLED.
Bishop and Flood surrendered Friday morning to SLED agents at the Marion County Detention Center, SLED spokesman Thom Berry told ABC News. They had a bond hearing following booking, Berry said.
Flood's attorney, Allie Argoe, said her client served with the military police in Massachusetts for 14 years before moving to South Carolina in 2007 where he spent 10 years with Horry County law enforcement.
Argoe declined to comment on the case but said her client has not entered a plea.
Bishop entered a not guilty plea, his attorney, Bert von Herrmann, told ABC News.
The attorney called the incident a "horrible tragedy" but said his client "was a passenger transporting them. He wasn't a decision maker. He was actually the junior person who was on duty."
Bishop "feels horrible for the families," von Herrmann added.
Copyright © 2019, ABC Radio. All rights reserved.