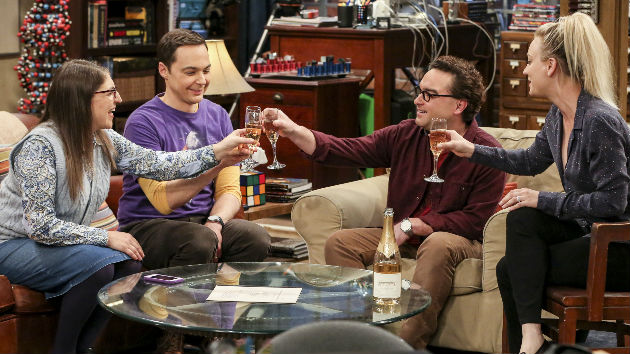 Michael Yarish/Warner Bros. Entertainment Inc. © 2018 WBEI.(LOS ANGELES) — The stars of CBS' The Big Bang Theory are sharing some laughs — and some tears — with Entertainment Weekly as part of the magazine's Winter TV Preview. The hit series is ending this spring.

In a video EW's website, Johnny Galecki, who plays Leonard; Kaley Cuoco, who plays his onscreen wife Penny; and Emmy-winner Jim Parsons, who plays Sheldon, share their early impressions of each other, and their hopes for the show's final episodes.

"There's no negative reason to stop doing Big Bang," Parsons says, adding, "It's both as complex and as simple as it just felt innately that it's just…it's time."

"None of us are going to be able to keep from crying during the last taping," says Galecki, "We’ve got to justify it in the writing somehow, because that's inevitable."

As if proving his point, Galecki breaks down. "Sensitive group," he says, trying to compose himself.

The three separately agreed that they all had one hope for the last episode.

"Other than fixing that God**** elevator, I don't know what to tackle," jokes Parsons.

"That would be a great show ending for me!" adds Cuoco.

Galecki says, "The elevator gets fixed, at least for a minute, and then maybe we all get stuck in it."
Copyright © 2019, ABC Radio. All rights reserved