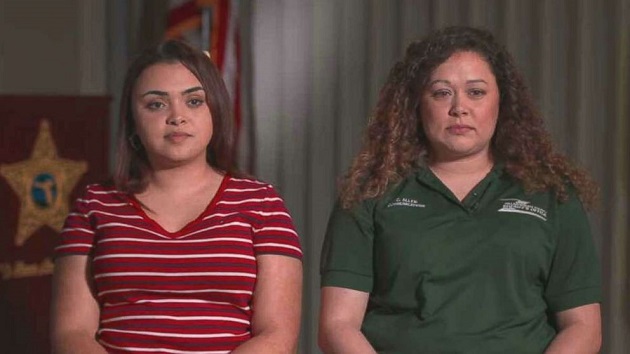 Amanda Antonio, left, and 911 dispatcher Cheyanne Allen, right. (ABC News)(TAMPA, Fla.) — A Florida woman had a tearful reunion with one of the rescuers who saved her from drowning this week when she lost control of her vehicle and landed upside down in a muddy ditch.

Amanda Antonio, 33, said she felt as if she'd met an "angel" on Thursday when she came face-to-face with Cheyanne Allen, the Hillsborough County Sheriff's Office operator who answered her desperate call on New Year's Day when she veered off a Tampa highway and found herself trapped in a ditch full of muddy water.
"I'm just glad that she was there to answer the phone because she really kept me calm," Antonio told ABC News' Good Morning America in an interview on Thursday. "I was panicking at first, but hearing her voice — she was so calm throughout the whole thing — it just kept me calm."
"She was the first angel I met that night. She brought everyone else to me," she added.
Antonio was nearly encased in mud when they finally located her at around 4 a.m. Tuesday morning, according to the sheriff's office.
"The water was rising and there was real fear of her drowning," the office said in a statement after the rescue. "Our communications team did an incredible job of keeping her calm while 13 patrol units looked for her in the thick fog that was blanketing the area making it difficult to find her."
When asked about the rescue on GMA Thursday, Allen said Antonio's survival is proof that "people were definitely watching over us."
"I just wanted to stay on as long as I could to keep her calm because, honestly, I didn't know what the outcome was going to be," Allen said. "I was really nervous when she was talking on the phone with me and I was scared for her.
"I've never gotten to meet anyone that I've been on the phone with and for this to be such a crazy story, I'm glad I just got to hug her and know she's OK," she added.
Antonio found it hard to describe the joy she felt when paramedics finally located her. She thought she had about 30 seconds left before she would have been completely submerged.
"I'm just grateful that they were able to help me and pull me out," Antonio said. "They were like you're so lucky. … The only reason why we saw you is because the helicopter spotted the bumper of the car."
She added, "In a way they seemed like they were in shock, like, 'She's alive!' They seemed happy. This was definitely a miracle."
She said she's looking forward to meeting the other officers who helped her soon, but she wanted to make sure that Allen got the recognition she deserved.
"Not many people really recognize the hard work you have to put in, rather than just the police officers and everyone else," she said, looking toward Allen. "They do hard work too, but you're one of the first people that pick up and I'm grateful."