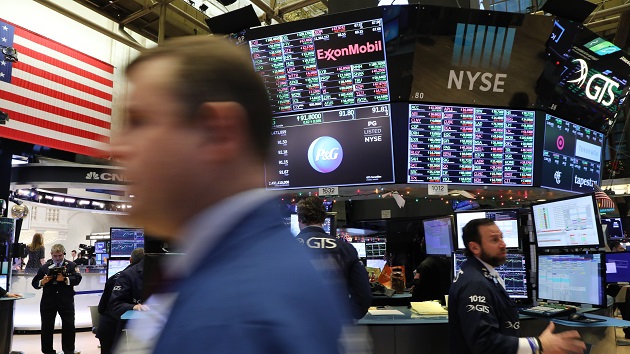 Spencer Platt/Getty Images(NEW YORK) — The U.S. stock market started 2019 in negative territory, as a slowing Chinese economy weighed on equities.
The Dow Jones Industrial Average was down 1.6 percent in early trading, Wednesday morning. The tech heavy Nasdaq also opened lower, down 1.7 percent. The S&P 500, however, was up 0.9 percent.
"I think the only explanation is that we've had this really nice rebound," Craig Johnson of Piper Jaffray told ABC News. "We sold off really hard, and then we had a relief rally. It's not tax law selling anymore, that's already done, that was over in December, and Chinese industrial production was really weak."
"Institutional investors are talking about China and what's going on there rather than what's going on in Washington, with the shutdown and tariffs," Johnson added.
Copyright © 2019, ABC Radio. All rights reserved.