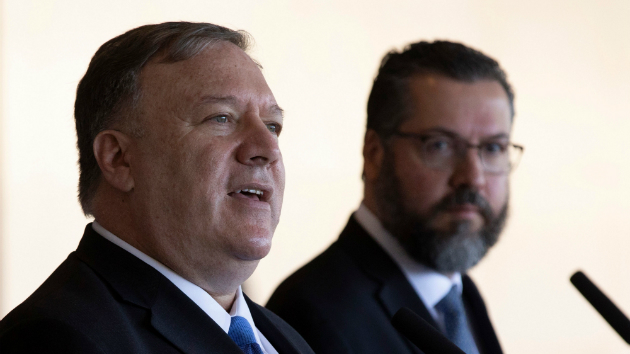 SERGIO LIMA/AFP/Getty Images(WASHINGTON) — U.S. Ambassador to Russia Jon Huntsman visited a U.S. citizen detained in Russia, expressed his support for him, and offered the embassy's assistance, a State Department official told ABC News.
It was a strong show of support for Paul Whelan, who was arrested on Friday by Russian authorities and accused of spying by Russia's Federal Security Service, or FSB.
Whelan's twin brother, David Whelan, also confirmed that State Department officials visited Paul and said he was told that his brother is doing relatively well, given the circumstances. Huntsman called Whelan's family, according to the State Department official, but it was unclear who he spoke with in the family.
"He is doing well and able to give them a list of things he needed," David Whelan told MSNBC on Wednesday. "The email I saw said he was fine. I take that as a good sign. No one is going to be in great condition after being in detention, but no worse for wear."
Whelan is being held at the notorious Lefortovo Detention Facility, named after the Moscow district where it is located, with many spies and political prisoners as inmates. It was once run by the FSB, the successor to the KGB.
"We have expressed our concern about the delay in consular access through diplomatic channels," the State Department official said in a statement to ABC News.
Secretary of State Mike Pompeo voiced similar urgency earlier Wednesday, saying the U.S. was requesting consular access to Whelan and requested more information from Russia on "what it is he is accused of."
"We've made clear to the Russians our expectation that we will learn more about charges and come to understand what it is he is accused of. And if the detention is not appropriate, we will demand his immediate return," Pompeo said on a visit to Brazil.
International treaties mandate that detained Americans be given access to U.S. consular officers for legal guidance.
Whelan, a former staff sergeant in the U.S. Marines, was in Russia to attend a wedding, his family said. His friends later became concerned after he failed to show up at the wedding.
Whelan's family has denied he is a spy and said they're concerned for his safety.
"He's got a military background, he's been in corporate security for years. He was former law enforcement. He was going to be very well aware of the risks of traveling in Russia," David Whelan told ABC News on Tuesday. "I just don't see him putting himself in a position where he would be considered to break the law by a government like Russia's."
Paul Whelan was given a bad conduct discharge from the Marines for larceny, which his brother said he did not know about.

"That was a surprise to me," David Whelan told MSNBC.