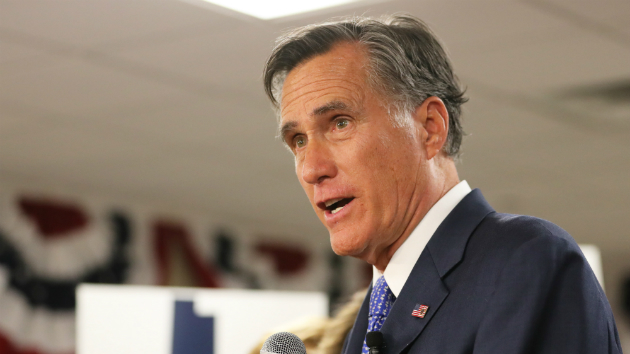 George Frey/Getty Images(WASHINGTON) — Former Republican presidential candidate Mitt Romney attacked Donald Trump in a searing op-ed on Tuesday, calling the president's lack of character his "most glaring" shortfall.
In an op-ed published in The Washington Post, the incoming senator from Utah said Trump had not "risen to the mantle" of the presidency and accused him of causing distress around the globe.
"His conduct over the past two years, particularly his actions this month, is evidence that the president has not risen to the mantle of the office," the soon-to-be junior senator wrote. "A president should demonstrate the essential qualities of honesty and integrity, and elevate the national discourse with comity and mutual respect."
Romney, scheduled to be sworn into the Senate on Thursday, also attacked the president's character, calling it one of his biggest downfalls.
"With the nation so divided, resentful and angry, presidential leadership in qualities of character is indispensable. And it is in this province where the incumbent’s shortfall has been most glaring," Romney said.
“I do not intend to comment on every tweet or fault. But I will speak out against significant statements or actions that are divisive, racist, sexist, anti-immigrant, dishonest or destructive to democratic institutions,” he added.
Romney did praise a number of Trump appointments who have since left — naming former U.S. Attorney General Jeff Sessions, former U.S. Ambassador the U.N. Nikki Haley and ex-Secretary of State Rex Tillerson as "encouraging" choices — and he commended some of the president's policies.
"He was right to align U.S. corporate taxes with those of global competitors, to strip out excessive regulations, to crack down on China’s unfair trade practices, to reform criminal justice and to appoint conservative judges," Romney said. "These are policies mainstream Republicans have promoted for years. But policies and appointments are only a part of a presidency."
Trump, who previously attacked Romney as a "failed candidate" over his 2012 loss to Democrat Barack Obama, had not commented on the op-ed as of early Wednesday morning, but his 2020 campaign manager came to his defense almost immediately.
“The truth is @MittRomney lacked the ability to save this nation,” Brad Parscale, the commander-in-chief's 2020 campaign manager, tweeted late Tuesday night. ”@realDonaldTrump has saved it. Jealously is a drink best served warm and Romney just proved it. So sad, I wish everyone had the courage @realDonaldTrump had.”
Romney straddled a line of support and disdain for Trump throughout his recent campaign for senator. Trump endorsed Romney's campaign.
"President Trump was not the person I wanted to become the nominee of our party, but he's president now. The policies he's promoted have been pretty effective. And I support a lot of those policies. When there's a place where I disagree, I point that out," Romney said in October.
Ronna McDaniel, the chairwoman of the Republican National Committee and Romney's niece, offered a cryptic tweet in the wake of the column's publishing, writing, "As the new Congress convenes, I hope all Rs come together to work to further @realDonaldTrump’s winning agenda and recognize his leadership has made our country safer and stronger."

Republicans must work against the socialist agenda Democrats are putting forward that will bankrupt and destroy our country. I urge every R current or incoming to work together to stop the obstructionist Democrats.