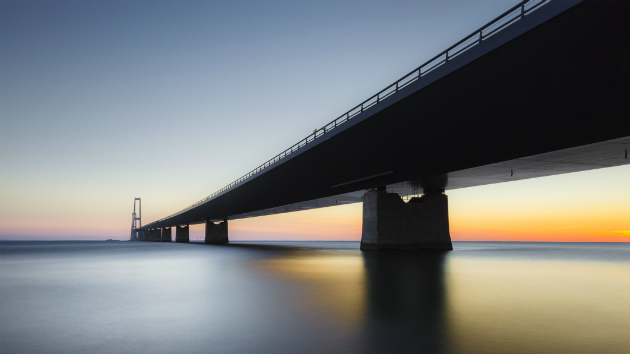 fottodk/iStock(LONDON) — Six people have died and 16 more were injured in Denmark after debris detached from a cargo train and hit a passenger express train on the Great Belt Bridge, authorities said Wednesday.
The trains were on parallel tracks but traveling in opposite directions, Deutsche Bahn, the cargo train operator, told ABC News.
The accident took place around 7:35 a.m. local time. The area was experiencing high winds and powerful waves caused by Storm Alfrida.
There were 131 passengers and three crew members on board the train.
The Great Belt Bridge connects the western island of Funen with the island of Zealand to the east. The bridge has now reopened for road traffic in both directions but remains closed to trains, police said in a tweet. Commuters have been advised to not slow down or take any pictures or video of the accident site in order to “have respect for the dead and injured.”
The Denmark Accident Investigation unit and Funen police have launched a joint investigation into the accident. The express commuter train departed from Aarhus at 5:19 a.m. local time and was headed for Copenhagen.
The cargo train involved in the incident was shipping goods for the beer company Carlsberg. Kasper Elbjorn, a spokesman for Carlsberg, told ABC News the company would be doing “everything to help."
“Deutsche Bahn Cargo, the shipper of our goods has unfortunately confirmed to us that cargo train carrying our goods was involved in the accident,” Elbjorn said. “We are deeply concerned about the accident. Our compassion goes to all involved.”
Jan Wildau, a spokesman for Deutsche Bahn Cargo Scandinavia, told ABC News that it would be fully cooperating with the investigation. The cargo train had been traveling to the Carlsberg Brewery in Frederecia, he said. The train had received the green light to cross the bridge from Banedanmark, the company in charge of train traffic control, he added.
Danish Prime Minister Lars Løkke Rasmussen said his thoughts were with the victims and their families and he thanked the authorities for their response to the accident.
“The morning's tragic accident on the Great Belt Bridge with many fatalities and wounded has shaken us all together,” Rasmussen said in a statement. "Ordinary Danes on their way to work or home from Christmas holidays have broken their lives.”
The prime minister of neighboring Sweden also expressed his condolences for the victims.
“Terrible train accident on Great Belt Bridge in Denmark as a result of the Storm Alfrida,” Stefan Löfven said in a tweet. “Our thoughts are with the injured and with the families and relatives of the dead. I have also said this in the morning to my fellow prime Minister, Mr Lars Løkke Rasmussen.”
Copyright © 2019, ABC Radio. All rights reserved.