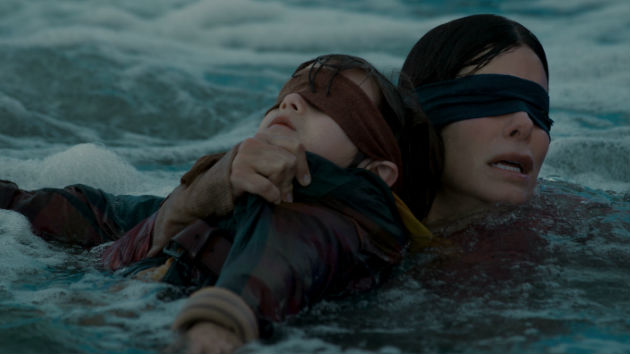 While Drake's In My Feelings challenge saw a number of people doing some particularly dangerous things set to his hit song — like accidentally getting hit by a car — the #BirdBoxChallenge has already led Netflix to tell people to literally take their blindfolds off.

The film has Bullock and company masking their eyes to avoid being killed, which means they spend much of the movie running, boating, and doing just about everything else blind. The Bird Box Challenge invites people to try the same thing — which, as you can imagine, is pretty dangerous.

"Can’t believe I have to say this, but: PLEASE DO NOT HURT YOURSELVES WITH THIS BIRD BOX CHALLENGE," Netflix tweeted. "We don’t know how this started, and we appreciate the love, but Boy and Girl have just one wish for 2019 and it is that you not end up in the hospital due to memes."

So far, some entries have included scaling escalators and moving walkways, which apparently haven't led to any injuries — but it's early yet: the movie only came out on the streaming service on December 23.