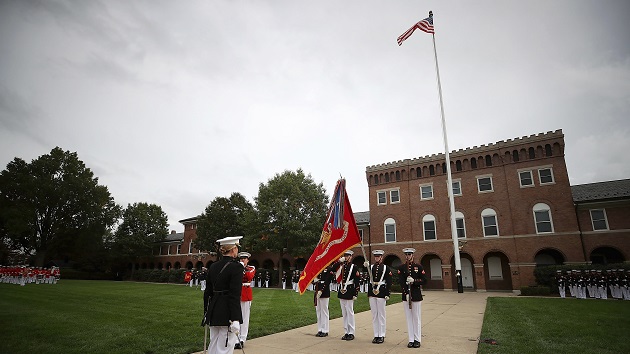 Mark Wilson/Getty Images(WASHINGTON) — A number of critical questions remain unanswered about the shooting death of an on-duty Marine in Washington D.C. on New Year's Day.
The investigation is ongoing, but local police have classified the case as a death investigation rather than a homicide investigation, meaning that it may have been an accident.
The Marine, assigned to Marine Barracks Washington and whose identity has not been publicly released pending notification of next of kin, was shot at approximately 5 a.m.
According to the police report, one individual "had been handling a firearm" and the victim was shot. Neither of the individuals are named in the report.
The report notes that "despite lifesaving measures" the victim "succumbed to his injuries."
According to a U.S. defense official, the gunshot appeared to be a negligent discharge, meaning the shooter did not mean to fire the weapon.
Alaina Gertz, the public affairs specialist for the Metropolitan Police Department, noted that the person who fired the weapon has not been charged and "based on our investigation no criminal intent has been established." She added that it will be up to the U.S. Attorney's office whether or not they face charges.
The Marine Corps stressed that the shooting did not pose a threat to local residents.
"The command's priorities are to take care of the Marine's family and friends," Col. Don Tomich, commanding officer of Marine Barracks, said in a statement on Jan. 1.
"We want to ensure these personnel are being provided for during this challenging time," Tomich said in the statement.
Copyright © 2019, ABC Radio. All rights reserved