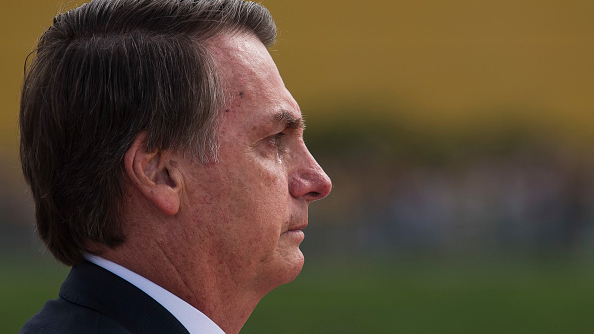 Bruna Prado/Getty Images(NEW YORK) — His supporters call him “The Myth.” But on Tuesday, Jair Bolsonaro’s presidency became a reality as he took office in Brazil, Latin America’s largest democracy.
Bolsonaro’s supporters see him as the one who’s going to put Brazil on the right track by putting an end to corruption. But others see him as deeply divisive, having made many racist, misogynistic and homophobic remarks. For this last group of people, their future is unclear, they say.
“I am scared,” Carlos B., 37, an architect living in Rio de Janeiro, told ABC News. He watched Bolsonaro’s inauguration ceremony on TV with his husband, he said. “We don’t know what is going happen. My husband is pushing to move out but I don’t want to leave my country.”
The former Army captain who is now the 38th president of Brazil, has said in the past that he would prefer a son who died in an accident than one who was homosexual. He also declared once that he was a proud homophobe.
According to Grupo Gay da Bahia, an LGBT human rights organization, 445 LGBT people died in 2017 from violence or suicide due to what it calls “LGBTphobia.” That equates to one death about every 20 hours, a 30 percent spike from the previous year, the organization said.
Carlos B. told ABC News that a month ago he was with his husband in one of Rio’s wealthier neighborhoods, Barra da Tijuca, when they were assaulted.
“We kissed on the beach and one man followed us and robbed us, saying that we deserved to be robbed,” he said. “I didn’t go to the police, I knew it was useless.”
Yet, despite fears over how they will be treated, some LGBT people believe there are more pressing matters to address across the country, such as corruption and the economy. Brazil is still reeling from ongoing criminal investigations that implicate oil and construction executives, politicians, congressmen and four former presidents, including the Workers’ Party Luiz Inacio Lula da Silva, who is serving 12 years for accepting favors.
“Major concerns in Brazil now are not LGBT rights, but to get out of the economic recession. Brazil needs a better economy. This is the priority," Tiago Pavonetto, 34, a lawyer in Sao Paulo who voted for Bolsonaro, told ABC News.
"After 14 years of [having the] Workers’ Party in power, it did not take me more than a second. I picked Jair Bolsonaro. There was no doubt. I voted for him,” he added.
Pavonetto also seemed to brush off the idea that you could change Bolsonaro’s mind about LGBT people, saying Bolsonaro’s beliefs are in line with other men his age. Bolsonaro is 63 years old.
"Jair Bolsonaro flirted with homophobia before his campaign,” Pavonetto said. “He is a rude man and represents the average opinion of any Brazilian man of his age. He is like my father.”