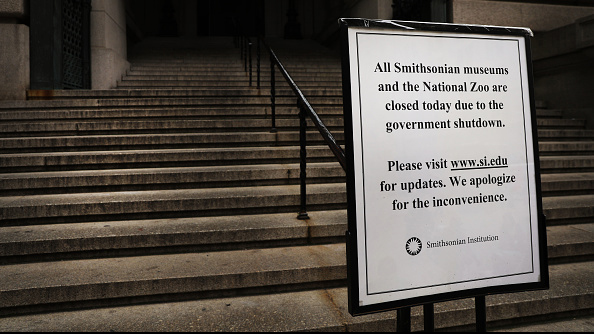 Spencer Platt/Getty Images(WASHINGTON) — As part of the federal government remains closed this week, more people are feeling the impacts around the country.
Federal employees and contractors say they are worried about money or the delays the shutdown could cause their work. Businesses say shuttered federal agencies cause delays. And tourists in Washington were met by locked doors instead of access to museums.
Here are some of the stories from people who say they have been impacted by the government shutdown.
No Love Potion Number Wine?
Winery owners in Ohio said they're worried they could lose business if a Valentine's Day-themed wine can't be approved by federal agencies. Benfield Wines was set to release Love Potion Number Wine and sell it online, but they need the government to approve the label. Owner Robert Benfield told ABC News affiliate WTVG they won't be able to put it out in time because of the shutdown.
National Mall vendors see far fewer customers
"We're a small business. This is what we rely on and it's a big deal. I don't think sometimes they think about those things when they make decisions that effect us on the lower end of things," Julia Benfield told the station.
It was midday on Wednesday — and still she had made no sales.
Jung, 58, has worked for nearly 20 years shuttling between different tourist destinations in the nation’s capital selling sweatshirts, snow globes with the presidential seal and decorative plates adorned with the U.S. Capitol.
Even though winter is a slow time for tourism in the District, the government shutdown and subsequent closing of all 17 of the city’s Smithsonian museums, which are world-class and free to the public, had drawn business to a halt, said Jung, who asked to only use her first name to protect her business.
“This is particularly slow. This is winter break,” Jung, gesturing to the fellow vendors on an abnormally quiet block of 15th street just outside the White House.
“Everybody’s concerned about this situation,” she said.
Jung has been following the news in hopes of more details on when the government will reopen, she said, and remains unsure on the politics surrounding the shutdown – specifically President Donald Trump’s border wall, which the president has demanded funding for despite push-back from Democrats.
As an American citizen, Jung said, she understands the need for border security. But she’s also a Christian, she said, and feels sympathy for people who “want a basic life.”
DC couples have to wait to make it official
Betrothed couples in the Washington, DC-area posted they were unable to get marriage licenses during the shutdown. The marriage bureau in the Capital is part of the DC Superior Court system, which is funded through congressional appropriations like much of the city's budget.
The DC court website says the Marriage Bureau and some other offices are closed during the shutdown, though court hearings and the clerk's office is open.
One couple that got married over the holiday posted they "can't call it official" until the government reopens.
Contract workers go without pay
Around the country people whose salaries are paid with government contracts are sent home without pay during a shutdown. Unlike government employees who can get back pay approved by Congress, these federal contractors are paid through private companies and have no recourse from the time they're out of work.
Julie Burr, an administrative assistant for the Department of Transportation in Kansas City, said she doesn't expect any compensation for the time she's been out of work during the shutdown and that she can't even get paid for the two weeks before it started because there's no one to process her time sheet.
"I'm just trying to take one day at a time honestly," Burr said in a phone interview Tuesday. "I keep turning on the news and think maybe today's the day something will happen."
She said she's taken extra shifts in her side job as a seasonal employee at Barnes and Noble but it only makes up 25 percent of what her normal pay would be and she's had to ask for an extension on her rent payment, which was due on the first of the month.
"I'm a single mom … we aren't a two income family or anything. It's just me, and I'm kind of trying to make things meet and if it comes to the point of selling items in the house I'll do that," she said.
Tourists left out in the cold

The shutdown caught some tourists by surprise. ABC News spoke to over a dozen tourists who found themselves unable to go to Smithsonian landmarks on Wednesday.
Nicklas Skar, a Swedish native, came to Washington on Tuesday night with his daughter. He said they planned to go to the Smithsonian on Wednesday morning in the last remaining hours before the end of the shutdown.
"We came down here for just a couple of days to visit the Smithsonian's and a lot of other stuff as well, so of course its a disappointment," he said.
Skar like many tourists said they found themselves adjusting plans and standing on the outside looking into the empty, dark windows of the Smithsonian Air and Space Museum and other

Lost time to plan environmental cleanups
Loreen Targos, an EPA scientist and steward for her local union chapter, said environmental cleanup or protection projects will be delayed because of the shutdown. She said EPA staff can't meet with partners to design projects to clean up environmental contamination or prevent future environmental problems.
"When we lose weeks like this we have to catch up and there's just huge delays in projects, and taking them into the next year or after," Targos said in a phone interview Monday, adding that it's impossible to know the extent of the impact until long after the shutdown ends.
She said all Americans are hurt with projects intended to protect health and the environment are delayed, but it will be impossible to know the impacts until long after the shutdown ends. Targos said she and other EPA workers are passionate about protecting Americans from environmental issues before it becomes a problem, and because of the shutdown they're unable to do that.
"People feel like 'I don't know how this impacts me,' that's because we were doing our job," she said.

5 people hospitalized after pedestrian bridge collapses onto DC highway
Traffic deaths increased among Black people more than any other race during pandemic: Study
Bumble gives all employees a paid week off amid reports of pandemic-induced burnout
California proposal aims to pay all overdue rent for low-income tenants impacted by the pandemic
Waitress abducted and assaulted after chasing 5 people who ran out on $70 bill: Police
Delta variant infecting mounting number of people in rural Kansas and Missouri