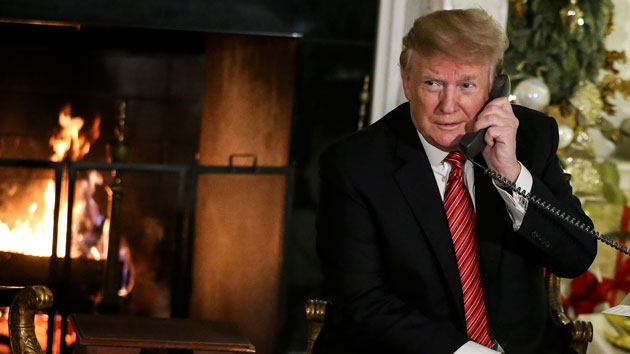 Oliver Contreras/For The Washington Post via Getty Images(WASHINGTON) — President Donald Trump has a simple set of resolutions for 2019.
"Success and prosperity and health for our country," he said. "That's all I want."
In a wide-ranging pretaped phone interview that aired on Fox News' "All American New Year," Trump stressed his desire for a border wall saying, "We have to have border security. The wall is a big part of border security," calling it "100 percent foolproof."
When asked about the government shutdown, the president said he's "ready, willing and able" to meet with Sen. Chuck Schumer and Rep. Nancy Pelosi "any time they want."
"A lot of people are looking to get their paycheck. So I'm ready to go any time they want," Trump said.
He also addressed his foreign policy, specifically Syria, where he announced earlier this month troops will be leaving soon.
On withdrawing troops from Syria, the president said, "Not only am I able to get out, but I've also won. You look at what I've done. We've largely eradicated ISIS. That doesn't mean we don't totally finish the job. That's going to be a short period of time. We have to bring our troops back home. It is time."
The president also commented on news of Sen. Elizabeth Warren announcing her presidential exploratory committee Monday saying he's "happy about it" and he thinks "she will be wonderful."
But of course he took a few shots at someone he has repeatedly referred to as "Pocahontas" in a mocking tone over her Native American heritage.
When asked if he thinks Warren can win, he said, in a comment that is drawing some scorn, "That I don't know. You would have to ask her psychiatrist."
"I hope she maybe gets the nomination. That would be a wonderful thing for me," Trump said.
Looking ahead in 2019, Trump was entirely positive, saying he thinks the United States will "have a great form of wealth" and "tremendous success with trade deals." He also commented on the military saying, "I think we're going to have tremendously rebuilt military for strength and hopefully we'll never have to use our military. It will be so strong we'll never have to use it."
Finally, the biggest winners and losers for 2018 according to Trump: the American people and anyone who tries to take him on in 2020.
"I think the winners are the American people. We've gotten them tax cuts and jobs — jobs like they've never had before," Trump said. "We've taken care of the military and rebuilt large portions and very shortly all of our military, which was depleted. I think that the big winners are the people of the country. That makes me very happy."
The new year will also bring a focus on the 2020 presidential election — something Trump was already teasing.
"The one that has lost, you know, I don't want to really say. You have certainly a lot of people that wanted to do things that it didn't work out," Trump said. "I think when you look at some of the candidates that are announcing right now, I think they'll end up being the losers. You have a lot of people — 32 people could be with the Democrats. Let's see what happens."
Copyright © 2019, ABC Radio. All rights reserved.