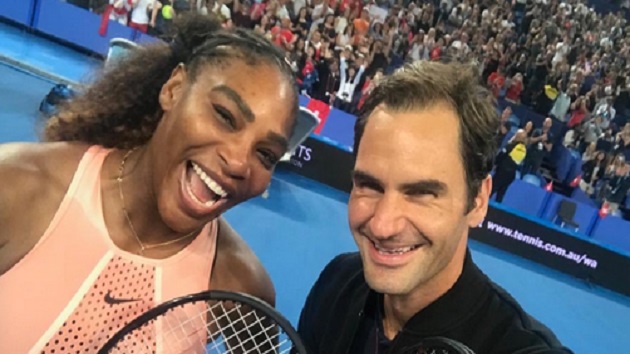 Twitter/@rogerfederer(PERTH, Australia) — It was sportsmanship at its best on New Year's Day in Perth, Australia, as Roger Federer defeated Serena Williams in mixed doubles, then took to the mic to praise the iconic athlete.
Federer and his partner Belinda Bencic defeated Williams and Francis Tiafoe 4-2, 4-3 to advance in the Hopman Cup, but the event was more about two tennis greats facing off and then showing great esteem for the other.
After the match, Williams told the crowd she was "kinda sad the match was over. I was just warming up."
About Federer, she added, "We grew up together … and having an opportunity after all these years. We've actually never done this and so this was super cool that we got to do this at such a pinnacle point in both our careers. For me, it was super cool! I wanted to take pictures and wanted to bring my baby out."
Williams leads Federer 23-20 in career grand slams won, but the two will be forever linked as the dominant male and female, respectively, in tennis for this era, maybe all-time.
Federer gushed right back after the match, not only smiling for a selfie with the empowering athlete, but adding, "Your serving, especially the last serve at 3-3, I'm like 'I've got to win this point,' but it's Serena Williams,' I was telling myself. And I was telling myself, 'This is maybe what I've always wanted, maybe a big-time moment like this.'"
He added that it was an "honor" to face off against Williams.
"It was great, great fun, and she's a great champion and you see how focused and determined she is, and I love that about her," he added.
Williams fired a compliment right back at the male champion, calling him the "the greatest of all-time to be honest" and that is "both on the court and off the court. He has such charisma, he's just a wonderful player."
The crowd wasn't just treated to a super match, but two icons effusing respect for one another in the best way.

Ryan Reynolds teams up with Match and out-of-work wedding singers to get you to “Get Back to Love”
Clarence Williams III, “Mod Squad” and “Purple Rain” actor dies at 81
Roger Federer withdraws from French Open
‘RHOA’s Porsha Williams shuts down pregnancy rumors amid engagement
Phoenix Suns’ Monty Williams chosen by fellow coaches as Coach of the Year
‘RHOA’ star Porsha Williams confirms relationship with Simon Guobadia