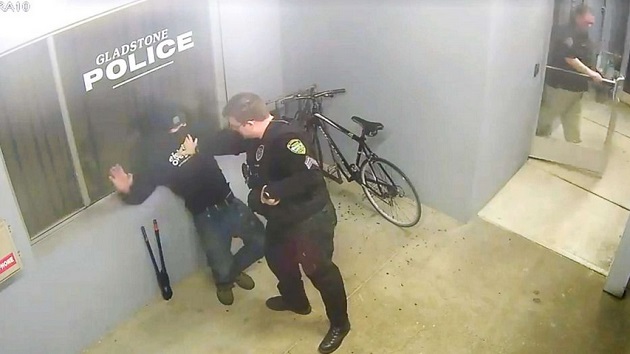 Gladstone Police Department(GLADSTONE, Oregon) — It's almost like he planned to get caught.
An Oregon man was arrested last week for trying to steal a bike that was locked up at the front door of a police station in Gladstone, about 10 miles south of Portland.
The Gladstone Police Department caught it on surveillance video. The footage shows suspect Adam Valle, 26, wearing a mask as he cuts the lock off the bike with a bolt cutter, just before Sgt. Matt Okerman walks out to confront him.
“It’s dumb, you know,” Sgt. Carl Bell of the Gladstone Police Department told ABC News. “I have not actually seen something that blatant because the officers were inside watching on video camera.”
“The camera that you see is actually in our office.”
Bell said that when asked why he would try to steal a bike in front of a police station, Valle would not answer.
Valle was arrested on Dec. 27 and charged with theft, criminal mischief and felon in possession of weapons, Bell said, adding that he had been found guilty of drug possession in 2014. He said that Valle was released the next day after setting up a later court date.
“People stealing bikes isn’t rare; it’s just where he did it at this time kind of caught everyone off guard, kind of made us chuckle a little bit, you know,” Bell said.
Valle did not immediately respond to ABC News’ request for comment and it's unclear if he has a lawyer
Copyright © 2019, ABC Radio. All rights reserved.