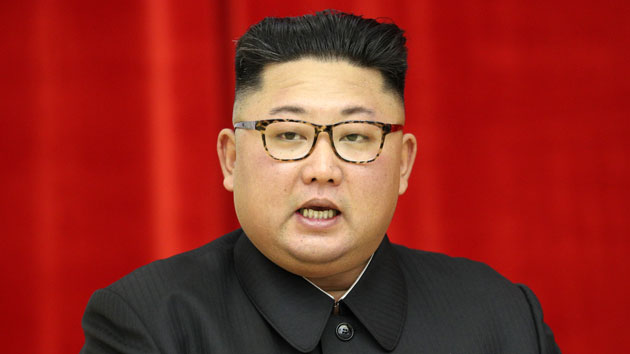 Pyeongyang Press Corps/Pool/Getty Images(SEOUL, South Korea) — Kim Jong Un says he is ready to sit down again with President Donald Trump — but also warned the United States against imposing more sanctions.
During his annual televised New Year's speech, the North Korean leader said he hopes a follow-up summit meeting will “produce an outcome welcomed by the international community.”
Kim and Trump met in June in Singapore for the first time in the history of the rival countries.
But in the 30-minute speech on New Year's Day, Kim also warned that North Korea may choose a “new path” if the United States continues to “break its promises and misjudges our patience by unilaterally demanding certain things and pushes ahead with sanctions and pressure."
In the months since the historic summit, leaders from both countries, including U.S. Secretary of State Mike Pompeo, have been trying to negotiate a second meeting between Trump and Kim. Both countries, however, have been at an impasse about the progress of denuclearization.
Kim, meanwhile, also called for stronger ties with South Korea and announced a willingness to resume two inter-Korean cooperative projects in the North — Kaesong Industrial park and Mount Kumgang tourist resort — which had been halted due to strained relations.
Neither of those are currently possible for South Korea unless sanctions on the North are removed.
“Kim is hinting that if things come to worse, North Korea could go back to the economic-nuclear dual path,” Cheong Seong-chang, director of unification strategic studies program at the independent Seoul-based think tank Sejong Institute, told ABC News.
The North Korean leader is also indirectly demanding his neighbors to the South push the U.S. and U.N Security Council harder to lift sanctions in exchange for the two countries to resume inter-Korean cooperative projects, Cheong said.
Kim’s speech came against the backdrop of a new look with a modern setting — a carpeted library full of books, plush leather sofa and an armchair set with a mega-sized portrait painting of his father Kim Jong Il and grandfather Kim Il Sung hanging on the wall — a sharp contrast to his usual stiff public speeches at a podium in front of tens of thousands people who dutifully respond with thunderous applause.
"It looks like he wanted to show off” that he is ready and recharged to deal with the international community after the June summit, Cheong explained.
The new look also comes in the wake of three summits — two at the border town Panmunjom and the latest in Pyongyang — with South Korean President Moon Jae In, Cheong added.
“Up until even last year, he stood and read the New Year’s speech in a rather stiff and strong tone," Cheong said. "But this time his voice was very calm and stable. It was unprecedented.”
Copyright © 2019, ABC Radio. All rights reserved.

‘Keeping Up with the Kardashians’ series finale: Kim opens up about divorce from Kanye West, “It’s the little things”
“It’s not the years, it’s the mileage”: ‘Raiders of the Lost Ark’ turns 40 on Saturday
Galactic Snackin’ Grogu from “The Mandalorian” might just be the year’s cutest toy
TSA warns of staffing shortages at more than 100 airports, looks for volunteers
Fauci warns COVID-19 variant 1st detected in India still a threat to US
Longtime ‘Bachelor’ host Chris Harrison leaves franchise after 19 years