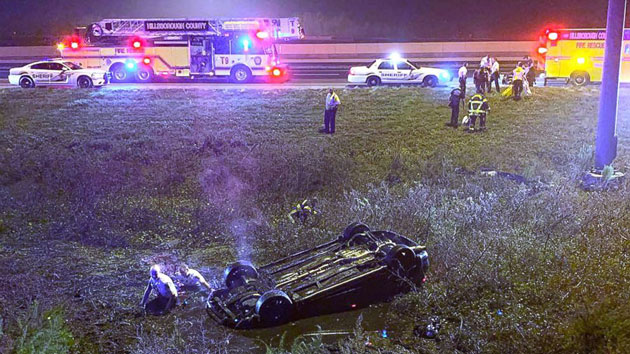 Hillsborough County Sheriffs Office(TAMPA, Fla.) — A woman drowning in thick, muddy water that was rising up to her neck was rescued just in time by Florida deputies who raced through thick fog to find her just hours into the new year.
The desperate rescue began when the woman's car flipped into water as she drove near Tampa's Florida State Fairgrounds shortly before 4 a.m., the Hillsborough County Sheriff's Office said.
As the muddy water rose from her chest to her neck, the 911 communication center could "hear the desperation in her voice" when she called for help, authorities said at a news conference Tuesday.
Thirteen patrol units raced to the area, searching through thick fog that had blanketed the area, the sheriff's office said.
Some 15 minutes later, authorities found the woman, and "after fighting the mud she was encased in, they were finally able to rescue her," the sheriff's office said in a press release.
She is home in good condition, the sheriff's office said, calling her "extremely fortunate."
Hillsborough County Sheriff's Office spokesman Daniel Alvarez told reporters it was a "great scenario where everything just came together the right way." "We fought the mud, we fought the weather, we fought the lack of knowing where she was, and today she came out alive because of a really good team effort."
Copyright © 2019, ABC Radio. All rights reserved.