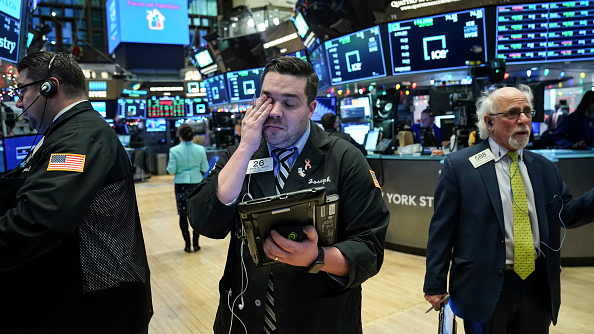 Drew Angerer/Getty Images(NEW YORK) — If you followed the U.S. stock markets in December, it might've felt like your financial future was on a roller coaster ride. Since October, the markets have dipped several times, raising doubts over the longevity of a bull market that's lasted 10 years — the longest in history.
The week ending on Dec. 21 proved to be the worst week for stocks in the 10 years following the Great Recession. The tech-heavy NASDAQ index went into "bear territory" stock market.
On Christmas Eve, the S&P 500 also touched bear territory.
Given all that see-sawing, how's a non-finance person to make sense of it all? Here are some simple question and answers.
What exactly is a bear market?
A market is "bullish" when it's going up. When it's going down, it's "bearish." But when analysts declare a "bear market," they're referring to a 20 percent drop below the year's highs, or a loss of one-fifth of an index's value, be it the Dow Jones Industrial Index, the NASDAQ or the S&P 500.
By Dec. 24, the worst Christmas Eve trading session in U.S. history, two of the three major U.S. indices were in bear territory. The first to trade one-fifth of its previous value lower was the tech-heavy NASDAQ, which houses the FAANG stocks: the market acronym for tech giants: Facebook, Apple, Amazon, Netflix and Google.
On Christmas Eve, the S&P 500 also touched bear territory, and also closed the trading session as the worst Christmas Eve trading session in history. Then, when the markets opened Dec. 26, they rebounded and the Dow posted the largest one-day point gain in history.
So what should I do when stock prices keep going down?
The best answer is probably easy: Nothing.
If you're a long-term investor, it's probably best to wait it out. The economy and these bull and bear runs tend to be cyclical.
"The danger of selling now is figuring out when to get back in. If you didn’t call the top, why are you confident that you can call the bottom?" Timothy Duy, senior director of the Oregon Economic Forum, told ABC News.
"Financial advisers will generally say that the long-term investor needs to stay calm and not make rash decisions during market downturns. Stocks recovered their losses from the Great Recession. If you sold at the bottom and then waited two or three years before getting back in, you lost out on significant gains," Duy said.
It's long-term investors who can afford a bit of risk. It all depends on your timeline, experts say.
"Look at your perspective. Am I retiring in two years? I want to have more cash and less risk in investments. If I have 30 years, this is a good opportunity to buy for my portfolio, especially risky bets," Mike Matousek, head trader at U.S. Global Investors, told ABC News.
What's making the market go down?
Investors don't like uncertainty, and there's a lot of it out there. One is the trade war with China, which is dragging on longer than people expected.
Tariffs: These are taxes on imports or exports, and it makes goods expensive. The trade war is hurting several U.S. sectors. Farmers, for example, aren't able to sell as many goods to China, which is a huge customer. Likewise, more expensive Chinese parts or metals are adding hundreds of millions of dollars in costs to carmakers and other sectors that rely on steel and materials. These costs end up getting passed on to consumers.
The Government Shutdown: A deal doesn't seem to be close, and that's got investors worried.
A slowing economy: The Federal Reserve raised interest rates four times this year because the economy is good. That makes it better for savers, who will get a little more interest. But it's less "cheap money," which means it will cost a little more to get a mortgage or a car loan and may cause your credit card balances to go up. These moves were all expected and are signs that the economy is strong enough to raise rates. But, the Fed did forecast slower economic growth than expected and that caused the more pessimistic investors to worry about a global economic slowdown.
The Chinese economy is also slowing down and the tariffs aren't helping them, either, since some U.S. companies are moving production to other countries. China is the world's second largest economy, so having the world's two largest economic superpowers duking it out in a trade war is rattling investors.
What's technical trading?

Traders who use technicals are basically following a chart-based approach to buying and selling rather than focusing on the overall health of a company or the economy, and they're often focused on the market's momentum at the current time.
"It doesn't matter if they make jelly beans or trash can lids, if a stock's going up you want to own it. If it's going down, you don't want to own it," Matousek said.
Take Netflix, for example. It's considered a sexy stock by many people.
"Netflix isn't making money but everyone wants to own it, they were losing money all year and people still want it! People will buy an overvalued stock and keep pushing it up," Matousek said.
That may not make sense, but if you're a money manager, it does. Money managers are basically judged on whether they beat the performance of the S&P 500, which is an index of about 500 of the most influential companies in the U.S., covering most sectors of the economy.
"Wall street is afraid of underperforming the benchmark," Matousek explained. "Netflix is a heavy holding, so if there's a large-cap mutual fund, if Netflix is in the S&P 500 and is going up, people are forced to buy it. It's a top performer and it's driving the S&P higher, so people need to keep up with the benchmark. Eighty percent of money managers don't beat the benchmark."
"If you were a technical trader you would say Netflix is breaking down, starting in July or August and shorting it or selling a long position," Matousek said. "Momentum for short-term players for Netflix is down; the long-term is up. If you look at a five-year chart of Netflix stock, it's up and to the right. On a six-month chart, it's down and to the right."