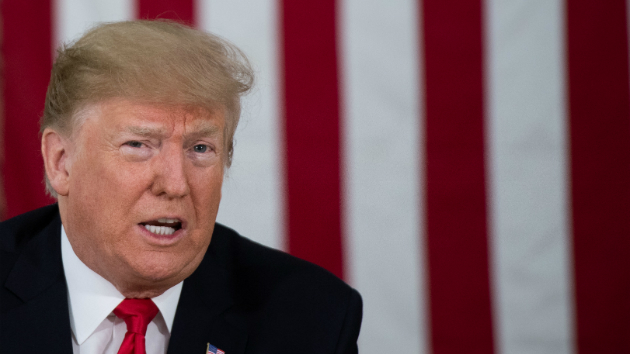 SAUL LOEB/AFP/Getty Images(WASHINGTON) — President Donald Trump defended his promise to build a solid border wall all along the U.S.-Mexico early Monday, one day after outgoing chief of staff John Kelly said in an interview that erecting a concrete wall along the entire border was already off the table.
The president tweeted Monday morning that the concrete wall was "NEVER ABANDONED."
"Some areas will be all concrete but the experts at Border Patrol prefer a Wall that is see through (thereby making it possible to see what is happening on both sides). Makes sense to me!" he tweeted.

An all concrete Wall was NEVER ABANDONED, as has been reported by the media. Some areas will be all concrete but the experts at Border Patrol prefer a Wall that is see through (thereby making it possible to see what is happening on both sides). Makes sense to me!

Trump blamed the media in the tweet, even though Sunday's news cycle reported on Kelly's comments.
In an interview published in the Los Angeles Times Sunday, Kelly, who will be leaving the post this week, gave a wide-ranging account of the some of the president's policies, including immigration and the border wall.
“To be honest, it’s not a wall,” Kelly he told the paper.
The interview comes as Trump is feuding with Democrats over funding for a border wall and security.
Kelly described in the interview coming into the job in early 2017 and seeking advice from border patrol agents, among others who secure the area.
“They said, ‘Well we need a physical barrier in certain places, we need technology across the board, and we need more people,’” he told The Times.
Some 700 miles of border fencing along the nearly 2,000-mile border already existed by the time Trump came into office. Much of it was erected after the Secure Fence Act of 2006, signed by President George W. Bush, went into effect, and the building continued through the Obama administration.
Kelly added the president uses the word "wall" often, but acutally uses "barrier" or "fencing" to describe security measures along the border.
"But we left a solid concrete wall early on in the administration," he said, "when we asked people what they needed and where they needed it.”
The border wall was not the only topic on the president's mind on Monday, as he talked about his willingness to negotiate as part of the ongoing government shutdown.
In a preview of an upcoming phone interview that is slated to air on Fox News Monday evening, a clip of Trump's call with the news hosts was shared on Fox Business on Monday afternoon.
"I'm in Washington. I'm ready, willing and able, I'm in the White House, I'm ready to go. They can come over right now," Trump said in the clip, seeming to refer to Democrats. "They could have come over anytime. I spent Christmas in the White House. I spent New Year's Eve now in the White House. And you know I'm here. Ready to go."
"It is very important. A lot of people are looking to get their paycheck. And so I'm ready to go anytime they want," Trump said in the clip.
"No, we are not giving up," he added. "We have to have border security, and a wall is a big part of border security, the biggest part."