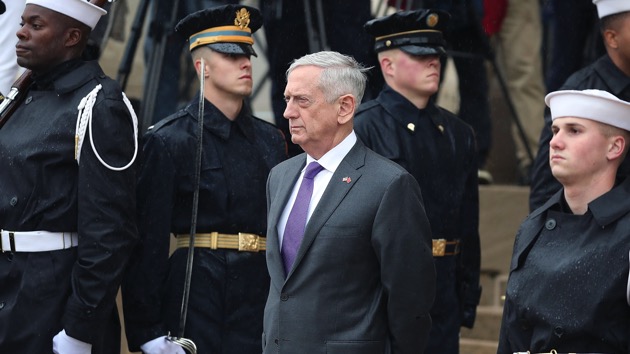 Mark Wilson/Getty Images(WASHINGTON) — In a farewell message on Monday, outgoing Defense Secretary James Mattis told Defense Department employees to "keep the faith in our country and hold fast."
Dec. 31 is the former four-star Marine Corps general's last day as Secretary of Defense after he resigned earlier this month over President Trump's decision to withdraw U.S. forces from Syria.
"Our Department's leadership, civilian and military, remains in the best possible hands," Mattis wrote to employees. "I am confident that each of you remains undistracted from our sworn mission to support and defend the Constitution while protecting our way of life."
In his resignation letter to the president, Mattis emphasized the importance of America's allies and partners, a sentiment which he echoed again in his farewell message.
"Our Department is proven to be at its best when the times are most difficult," he said. "So keep the faith in our country and hold fast, alongside our allies, aligned against our foes."
"It has been my high honor to serve at your side. May God hold you safe in the air, on land, and at sea," he continued.
While Mattis had originally intended to transition out of office at the end of February, Trump tweeted last week that his final day would be Dec. 31 and announced Patrick Shanahan as the incoming Acting Defense Secretary.
Shanahan, who currently serves as the department's deputy, has no foreign policy experience but spent three decades of his career at Boeing, ultimately becoming a senior vice president.
A phone call late on Monday night will mark the transition between Mattis and Shanahan, a U.S. defense official told ABC News.
The communications team for the Office of the Secretary of Defense will bring the two men into the call during which they'll read from an approved script. The call will be completed by 11:59 p.m., at which time the Pentagon will notify the White House that the official transfer of authority took place.
"The position of the Secretary of Defense is a command position and the purpose of the call is to ensure all members within the government know who is in command," the defense official said. "The call is also a courtesy, and a mark of respect for the incoming Secretary of Defense."
Copyright © 2018, ABC Radio. All rights reserved.