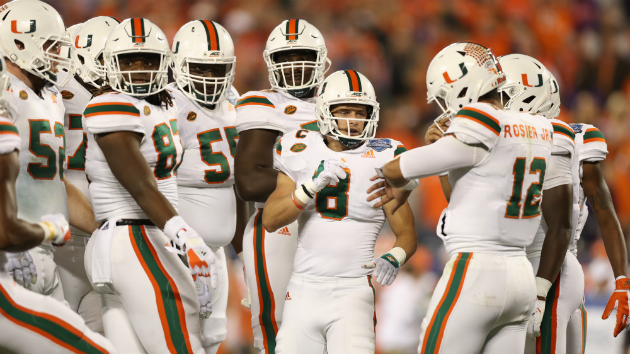 Allen Kee / ESPN Images(CORAL GABLES, Fla.) — Manny Diaz is heading back to the University of Miami to succeed Mark Richt as the next head coach of the Hurricanes' football team.
The move comes after Diaz, who served as Miami's defensive coordinator the past three seasons, was named Temple University's head football coach on Dec. 13.
"Miami is home. The University of Miami is home. The U has truly been 'the job' for me since I first got into coaching," Diaz said in a statement Sunday evening. "Having worked here over the past three years, I came to understand what it means to be part of 'The U' and came to appreciate the passion and commitment to excellence of all who proudly call themselves Canes."
"We will restore the football program to its place among the nation's elite and we will do it with hard work, dedicated coaches, and outstanding student-athletes," he continued.
Diaz will replace Richt, who announced earlier on Sunday that he is retiring after three seasons with the Hurricanes.
Before Richt announced his retirement, Diaz had signed on to coach the Temple Owls. On Sunday, Diaz said that "as excited as I am about staying home, I hate the way this unfolded with respect to Temple."
"I was given a tremendous opportunity to lead the Temple program and I was actively engaged in doing just that when I woke up this morning," Diaz said. "I never saw this coming, no one did."
In a statement Sunday evening, Temple athletic director Patrick Kraft said, "We are disappointed that [Diaz] is leaving, but wish him the best as he returns home."
Kraft added that the university has already launched a nationwide search for a new coach.
Copyright © 2018, ABC Radio. All rights reserved.