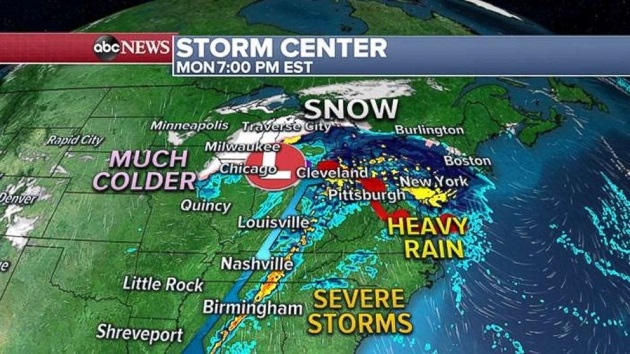 ABC News(NEW YORK) — Two different systems will combine Monday to produce a significant storm system affecting New Year’s Eve plans from the Central Plains to the Northeast. Temperatures will be mild, but revelers in Times Square will need to wear their ponchos and rain boots.
The developing storm will bring multiple hazards Monday and early Tuesday, such as heavy rain, snowfall and severe weather, including tornadoes and strong winds. Winter weather alerts and wind alerts have been issued for much of the Rockies, Upper Midwest, Ohio Valley and Northeast.
Heavy rain was falling across parts of the South and Midwest on Monday morning with rainfall rates of 1 to 2 inches per hour. Some of this precipitation is moving into the Chicago area, where it is encountering air temperatures near 32 degrees and bringing some freezing rain.
Meanwhile, a separate system is bringing snow across parts of the Dakotas and Minnesota. Nearly one-tenth of an inch of ice has fallen north of Sioux Falls, South Dakota, on Monday morning and a wind gust of 61 mph was reported in Rapid City, South Dakota.
During the day Monday, these two different systems will combine into a significant, but quick-moving storm. Severe storms are likely along the cold front Monday in parts of the Tennessee Valley and northern Gulf Coast.
Meanwhile, heavy rain will push into the Northeast with possible isolated flash flooding. Colder air on the back side of this storm will bring some snow for parts of the upper Midwest and Great Lakes.
The intensifying storm will race off to the Northeast during the evening hours, and bring strong winds and heavy rain from Philadelphia to Boston, including those ringing in the new year in New York City.
Wind gusts exceeding 30 mph are possible in New England and upstate New York leading to some power outages and downed trees. This is especially a concern in the Boston metro area early Tuesday morning.
Since the storm system is moving fast, snow accumulation and rainfall totals will be kept on the low side. Rainfall of 1 to 2 inches are possible along I-70 from St. Louis to central Pennsylvania, as well as along I-95 from Philadelphia to New Haven, Connecticut.
Snowfall totals of 3 to 6 inches are possible across Wisconsin and Michigan on Monday. Meanwhile, mixing precipitation could cause some ice accumulation in the metro areas of Chicago; Milwaukee, Wisconsin; and Burlington, Vermont.
Behind the storm, much colder air will dip into the central U.S. with wind chills below zero for a large part of the Northern Rockies and Northern Plains. Wind chills as low as minus 30 are possible in some parts of this region to ring in 2019.