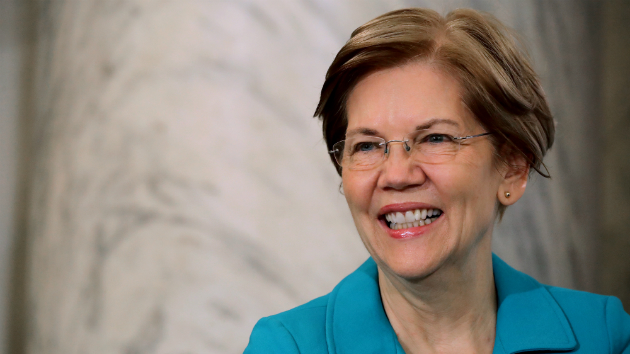 “In our country, if you work hard and play by the rules, you ought to be able to take care of yourself and the people you love,” the Democratic senator from Massachusetts says at the start of the new, 4 1/2-minute video.

“No matter where you live in America or no matter where your family came from in the world, you deserve a path to opportunity,” Warren continues in the new political video. “That’s the America I am fighting for, and that is why today I am launching an exploratory committee for president.”
A former Harvard law professor and champion of consumer protection, Warren has long been on the shortlist of potential 2020 Democratic candidates. Her fundraising prowess and popularity in progressive circles has left many in Washington referring to her as one of a few early front-runners as well, though more than two dozen other Democrats are also rumored to be considering presidential runs.

Warren’s staff tells ABC News the senator filed the paperwork for her exploratory committee with the Federal Election Commission Monday morning and is revamping her political and campaign website.
The video message out Monday features childhood pictures and grainy home video of the senator as a girl and then a young mom. Warren discusses her life growing up in Oklahoma where her mother worked a minimum wage job and her introduction into politics, when she helped President Barack Obama establish the Consumer Financial Protection Bureau after the 2008 financial crisis.

“America’s middle class is under attack. How did we get here? Billionaire and big corporations decided they wanted more of the pie and they enlisted politicians to cut them a fatter slice,” she continues in the announcement, but adds, “We can make our economy work for all of us.”
There is only a passing reference to President Donald Trump and his administration in Warren’s new video. Pictures of past and current White House advisers play over Warren’s voice saying, “The whole same is propped up by an echo chamber of fear and hate designed to distract and divide us."

“If we organize together, if we fight together, if we persist together, we can win,” Warren ends the video, making a subtle reference to a moment on the Senate floor in 2017 that went viral. Republican Senate Majority Leader Mitch McConnell seemed to scold Warren for breaking the rules and said to his colleagues, “She was warned. She was given an explanation. Nonetheless, she persisted.” The line became a rallying cry for feminists in Democratic circles.
Exploratory committees are a common tool that provide a legal and transparent framework for candidates to travel, fundraise, conduct polling and engage in other political activity as they weigh the decision to launch a campaign. They are separate and intentionally different than filing one’s candidacy and common early on in presidential primaries. Warren began significantly increasing the size of her political staff as well as her visibility on the national stage over the summer and last fall.
In late November, she delivered a speech in Washington, outlining her vision on foreign policy. A month prior, weeks before the 2018 midterm elections, she released a video talking with her family in Oklahoma and addressing her claims to Native American heritage with a DNA test. Republicans, including the president, pounced and ridiculed the senator. In response to that video this fall, Trump called Warren a racial slur, as he has often before. He tweeted, “Pocahontas (the bad version), sometimes referred to as Elizabeth Warren, is getting slammed.”
Over the summer, Trump had dared Warren to take a DNA test during an extended riff at a campaign rally when he mocking the senator, insulted her hygiene and promised to throw a DNA kit at her should the two of them ever debate. Early on in the 2016 Democratic primaries, a group of progressives set up a campaign called "Run Warren Run," to encourage Warren to jump into the race. The group was visible in early states and promoted her ideas around college affordability, health care and minimum wage. Warren did not enter that race, and this fall the Boston Globe editorial board wrote she may have “missed her moment.”
“While Warren is an effective and impactful senator with an important voice nationally, she has become a divisive figure. A unifying voice is what the country needs now after the polarizing politics of Donald Trump,” the board wrote.
Warren was first elected to the U.S. Senate in 2012, after raising an eye-popping $42.5 million to defeat Republican Sen. Scott Brown.