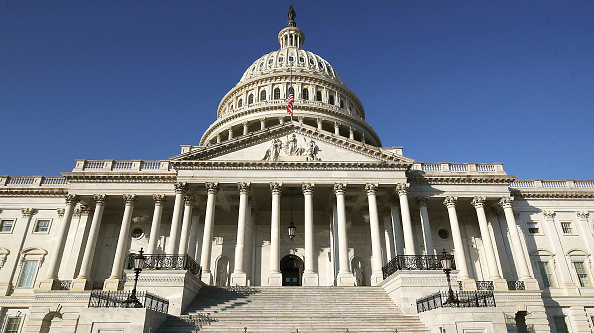 Mark Wilson/Getty Images(WASHINGTON) — House Democrats have prepared two bills aimed at ending the partial government shutdown, according to Democratic House aides, but neither is expected to include any new money for President Trump's border wall.
The bills will be made public Monday afternoon and House Democrats hope to vote on them by Thursday.
The measures include a mix of short-term and long-term funding plans to re-open the government agencies that have been closed for 10 days, after a dispute over funding the construction of a wall on the U.S.-Mexico border.
The first bill, sources say, will include year-long funding plans for every government agency currently closed, with the exception of the Department of Homeland Security.
The second bill would reopen and fund the Department of Homeland Security (DHS) only on a short-term basis. The so-called “Continuing Resolution” funding bill would keep the lights on at DHS only until Feb. 8, 2019, and continue current funding of $1.3 billion for border security.
The president has been demanding $5 billion in funding allocated for the construction of a “wall.”
The two funding bills will have to be formally introduced Wednesday, when the new 116th Congress is called into session and Democrats assume majority control of the House.
House aides point out that bills with very similar language all passed with bipartisan votes in the Senate last fall, either on the floor or in committee.
Still, spokesperson for Senate Majority Leader Mitch McConnell threw cold water on Democrats' new proposal. "It’s simple: The Senate is not going to send something to the President that he won’t sign."
The president's conservative allies quickly began sounding off against the latest proposal, which does not budge on Democrats' original offer. House Freedom Caucus chair Mark Meadows called it a "non-starter."
He tweeted: "Nancy Pelosi’s newest funding proposal doesn’t represent any serious attempt to secure our border or find a compromise. A $1.3 billion Democrat wish list that includes zero money for a border barrier is a non-starter and will not be a legitimate answer to this impasse."
Before the holiday, the Senate also passed a short-term funding bill for DHS, similar to the one proposed, to keep the agency open and operating at current funding level at least until February, but Republicans in the House and the president rejected that plan at the time.
Currently, an estimated 54,000 Customs and Border Protection agents and customs officers with DHS are working without pay as the shutdown continues into the New Year.
Democratic House sources Monday said their plan was to “isolate” the problem and “hopefully” open the majority of the government, while punting the larger conversation on immigration and border security.
It remains to be seen, however, if the White House will go along with this plan.
The president Monday tweeted, “I’m in the Oval Office. Democrats, come back from vacation now and give us the votes necessary for Border Security, including the Wall. You voted yes in 2006 and 2013. One more yes, but with me in office, I’ll get it built, and Fast!”
In 2013, Senate leaders from both parties reached a wide-ranging, bipartisan immigration agreement, but it failed to gain traction at the time in the Republican-controlled House.