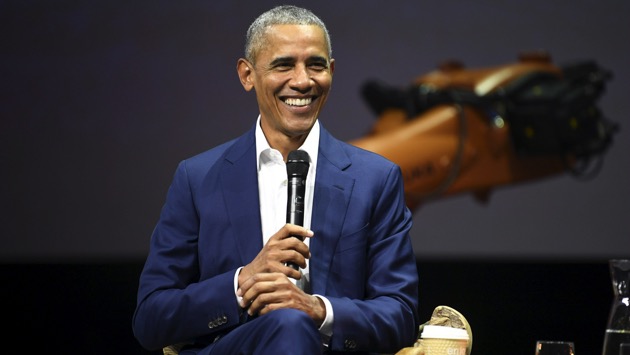 JUSSI NUKARI/AFP/Getty Images(NEW YORK) — If you're looking for something to read, listen to or watch heading into the new year, Barack Obama has shared his list of his favorite books, songs and movies of 2018.
"As 2018 draws to a close, I’m continuing a favorite tradition of mine and sharing my year-end lists,” Obama wrote on Facebook Friday. “It gives me a moment to pause and reflect on the year through the books, movies, and music that I found most thought-provoking, inspiring, or just plain loved. It also gives me a chance to highlight talented authors, artists, and storytellers — some who are household names and others who you may not have heard of before."
The first book on the former president's list comes as no surprise: it's former first lady Michelle Obama's candid memoir, "Becoming," which quickly became the bestselling book of 2018.
The former president noted, "Obviously my favorite!"
Among his favorite artists of the year, singer/songwriter Ashley McBryde made Obama's list alongside tracks by Beyoncé and Jay-Z, Prince, Mavis Staples, Anderson East and jazz vocalist Nancy Wilson.
Obama also seemingly spent a lot of time in movie theaters this year — or at least, watching flicks at home. His list of favorite films of 2018 includes "Black Panther," "BlacKkKlansman," and "If Beale Street Could Talk."
Get all of his picks below.

Here are Obama’s favorite movies of 2018:

Here are Obama’s favorite books of 2018:

Becoming by Michelle Obama
An American Marriage by Tayari Jones
Americanah by Chimamanda Ngozi Adichie
The Broken Ladder: How Inequality Affects the Way We Think, Live, and Die by Keith Payne
Educated by Tara Westover
Factfulness by Hans Rosling
Futureface: A Family Mystery, an Epic Quest, and the Secret to Belonging by Alex Wagner
A Grain of Wheat by Ngugi wa Thiong’o
A House for Mr Biswas by V.S. Naipaul
How Democracies Die by Steven Levitsky and Daniel Ziblatt
In the Shadow of Statues: A White Southerner Confronts History by Mitch Landrieu
Long Walk to Freedom by Nelson Mandela
The New Geography of Jobs by Enrico Moretti
The Return by Hisham Matar
Things Fall Apart by Chinua Achebe
Warlight by Michael Ondaatje
Why Liberalism Failed by Patrick Deneen
The World As It Is by Ben Rhodes
American Prison by Shane Bauer
Arthur Ashe: A Life by Raymond Arsenault
Asymmetry by Lisa Halliday
Feel Free by Zadie Smith
Florida by Lauren Groff
Frederick Douglass: Prophet of Freedom by David W. Blight
Immigrant, Montana by Amitava Kumar
The Largesse of the Sea Maiden by Denis Johnson
Life 3.0: Being Human in the Age of Artificial Intelligence by Max Tegmark
There There by Tommy Orange
Washington Black by Esi Edugyan

Here are Obama's favorite songs of 2018: